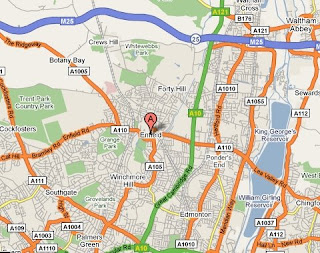 In a discussion board, someone said "I thought Royal Enfield was the field where the Queen kept the 'ens". So what is the real meaning of Enfield?

Royal Enfield started as a name for a model of bicycle coined by R.W. Smith & Albert Eadie in 1892 who also incorporated the Enfield Manufacturing Company that year. This would later become the great motorcycle manufacturer. Their inspiration was a contract for supply of parts they had with the Royal Small Arms factory that operated in the town of Enfield, north of London (currently the northernmost borough of the Greater London). Among many weapons produced there was the legendary Lee-Enfield rifle (copies are still being manufactured in the Khyber Pass region in the Afghanistani/Pakistani border today!). In many places one finds incorrect mentions to the rifles as "Royal Enfield rifle". Here is what wikipedia has to say about the origins of the word Enfield,

"Enfield was recorded in the Domesday Book 1086 as Enefelde, Einefeld 1214, Enfeld 1293, Enfild 1564, that is 'open land of a man called Ēana, or where lambs are reared', from the Old English feld with an Old English personal name or with Old English ēan 'lamb'. The feld would have been a reference to an area cleared of trees within woodland later to become Enfield Chase."

Enfield Chase does not exist anymore. While it is no longer officially a 'place', the Church of England Parish of St Mary Magdalene, Enfield Chase, officially holds that title. There is also a train station by that name. And I don't see any 'ens around!

The word Enfield also has a meaning in heraldry, it is a mythical beast having the head of a fox, the chest of a greyhound, the body of a lion, the hindquarters and tail of a wolf, and forelegs like an eagle's talons. The origin of the word in this context is disputed. There even is an Enfield Society on the topic!