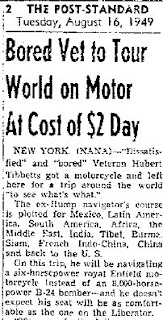 Hubert Tibbetts caused a bit of a sensation in August 1949 when he declared he was bored of the corporate life in New York City and was going to embark on a round-the-world trip on a Royal Enfield RE 125. He claimed he would keep his costs down by hunting and fishing along the way. The news even made the New York Times. Tibbets was a veteran of the Flying Tigers in Burma. The image on the left is from Syracuse's Post Standard. He apparently departed August 16th and I was able to find a piece from The Brownsville Herald, August 25 1949, that claims he looked like "Jungle Jim" when he reached the US-Mexico boarder.

From there on, I could find no traces of Mr. Tibbetts or his journey in the press. 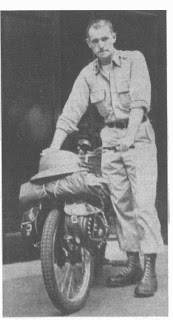 Except for a 2002 obituary in the New York Times of a Hubert Tibbetts, ex-ceo of Lipton Teas and respected philanthropist of the Greenwich, CT area, who was a Flying tiger in World War II! I have now confirmed independently that he was the same man. Obituaries say that after the war he graduated from Harvard in 1947 and then "traveled" and moved to St. Thomas, Virgin Islands where he was a promoter of boxing matches and started a peanut vending machine business. The "travel" was on the Royal Enfield, but an accident in Central America ended the trip and he settled in St. Thomas. He joined Lipton in 1969 and rose through the ranks and expanded and diversified the company significantly. The picture on the left is from REVS.