I was watching a rerun of "Frasier" the other night. I have a DVR/Tivo so I fast-forwarded through the commercials. But suddenly I noticed something funny about a Nivea commercial and I "rewound" and ran it in slo-mo and... There it is! A beautiful black bullet (in another scene they show the other side with a chromed air filter and springed passenger seat). 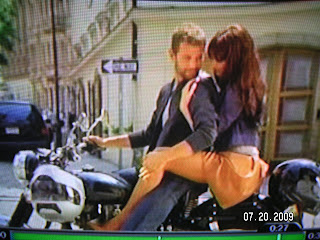 The story line of the commercial is that the lady prepares herself with Nivea cremes and the overt implication is that, as a consequence of that, there is this bearded guy on a Royal Enfield waiting for her. Now, why could they have chosen a Royal Enfield? I offer three scientific theories:

a) Enfields are cheap. Baloney. There are plenty of cheap bikes a TV studio could get to.

b) They happened to have one. Unlikely. Royal Enfields are rare enough in the US.

One thing is for sure, I know which of the three theories will be endorsed by the readers of this blog!