Ok, here are the pictures of the Redditch visit. The post is long, so you may want to leave it for later if you are in a hurry.

We start with "factory number one", the main Royal Enfield factory on Hewell road, 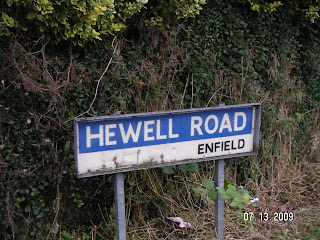 To give a better orientation of what is going on let us start with an aerial view. In it we have indicated in red the direction of the "walk" we will take and with green arrows the direction in which the various photographs were taken. 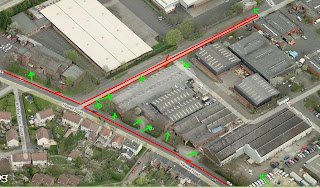 The first building that is still standing when one approaches from downtown (moving left in the photo) along Hewell Road is the iconic building that says "Royal Enfield" on the roof. This photo is perhaps the oldest one available of the building, having been snapped during World War I showing machines ready for the military, 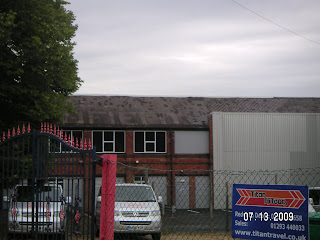 Here is a closeup of the roof, 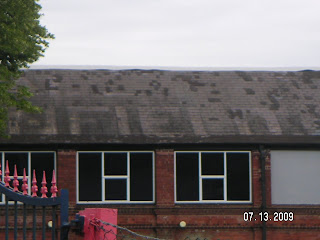 Here we understand better what is going on. It turns out the roof is not corrugated zinc as one would expect in such a building, but actually it is covered in ceramic tiles. It appears the tiles that were painted in white with the letters "Royal Enfield" are now lighter than the rest. Perhaps the paint protected them from the soot that used to be so common in England when coal was the main heating source. Or perhaps they reacted with the paint. Whatever the reason, they are a lighter brown than the others, and that is why we can still see the words today, but much more faintly that when they were painted white. The word "Royal" is barely visible because many tiles have broken loose from that portion of the roof. The building in general is not in good state of repair. Since it is brick-made, the walls appear solid, but there are broken windows all over the place, plants growing in the wrong places, etc.

The next picture is the front of the building. This is better upkept because they are trying to rent it or sell it. In fact, they seem to have converted the lower left corner into a small office to handle potential clients. 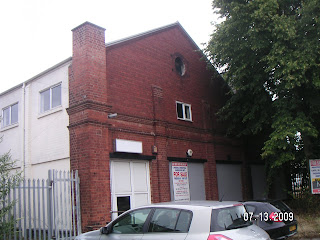 Next picture is of the buildings to the left, which appear also not too well upkept, I don't know what is going on with them. 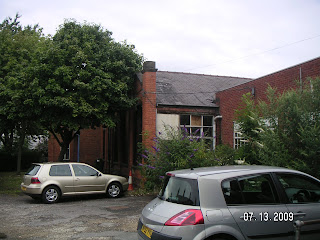 Moving to the building at the left of the previous ones, this building is odd in that it is at 90 degrees with respect to all the other buildings of the factory and parallel to the street. 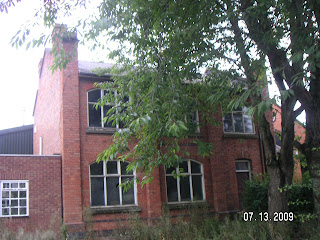 I read somewhere that this building in fact did not belong to Royal Enfield, it was either there before the plant was built in 1907 or somehow the land belonged to someone else. Major Mountford, the CEO of Royal Enfield, apparently tried to buy it in the 1950s but the owner did not want to sell. The building looks in good shape, although it had a broken window. It is not clear what is in it. Perhaps Trenton Electroplating uses it as an office. The building immediately to the left of it does belong to Trenton Electroplating, 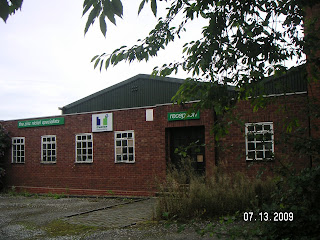 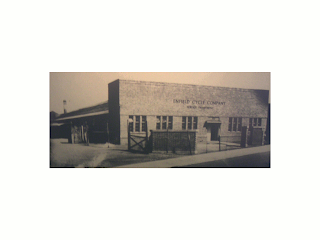 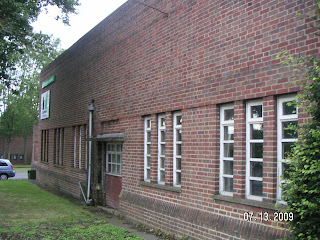 Here is a shot perpendicular to the front of it, showing the little grey disk that the REOC placed in 2001, 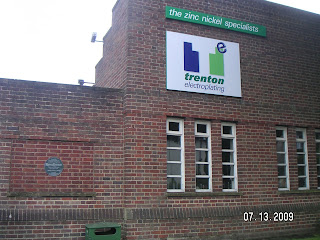 Notice that the old picture does not have that outhouse where the plaque is, perhaps it was added later. Let us now go around this building moving into the side street so we can see the side of the building, 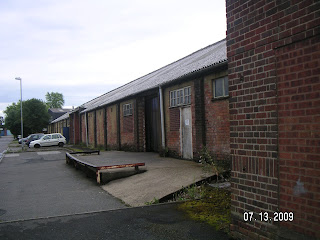 It does not look all that good. The building is active clearly (I could see lights, hear noises, there was a bay door open) but it is not too well maintained. Check for instance this picture of its midsection where we see a broken window (seems to be a hallmark of this area!) and a derelict sign. 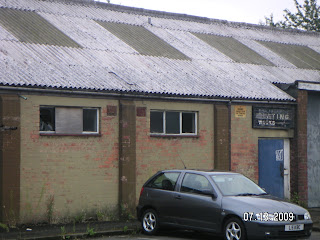 The sign is a mystery to me. When I saw it my heart raced, thinking, "this is leftover from Royal Enfield days!". But it is not, it says faintly "Trenton Plating", perhaps a previous name of the same company. The mystery is that this company has not been at this site all that long. When we first discussed this building one of the readers in David Blasco's blog posted a picture taken clearly after 2001, since it included the REOC plaque, in which the building is clearly vacant. So did someone bring that derelict sign from another place? I don't know.

Continuing down the road towards the back of the building, I was planning on going around and looking at the back, in particular if there were other buildings that we may have missed from the air. Alas, Trenton Electroplating has now closed that street, 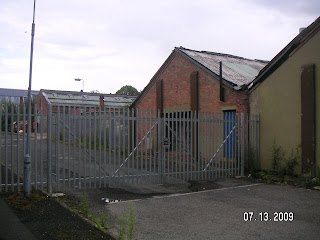 That fence is not visible in the aerial photos, so it is also recent.

So we keep going along the side street but now look towards the left. What we see is the little square building that used to be at the northeast corner of what was the sports field of the company. I had imagined it was a locker room. But that was too much imagination, it is the housing of a transformer of the electrical grid. One sees buildings of this sort in many cities in the UK and other places. So it probably was that all along, 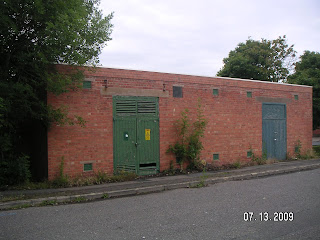 Returning to Hewell Road, we now face the last remaining building of the Royal Enfield company. This building was the cafeteria. It was built in the 50's and it was lauded in the press as a proof of the progressiveness and modernity of the company that it would treat its workers so well. It was roasted in Architectural journals, e.g., 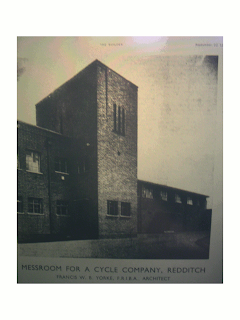 and today is the best conserved of all the buildings. It houses a company that makes bathrooms for people with special needs. It is clearly an active place, with cars in the carpark, etc, 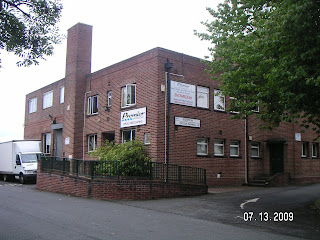 We now turn back on our steps along Hewell Road, moving all the way back, going underneath the railway and making a left in Clive Road, 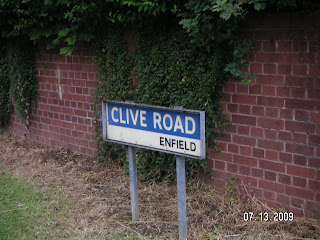 Advancing about 400 yards we encounter factory number five. We discussed that factory here, it is located in an old needle mill built in 1866. 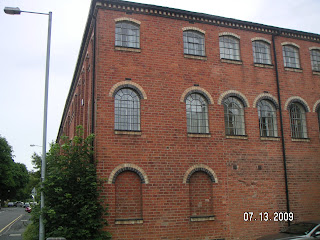 It is the oldest building occupied by Royal Enfield and it is in excellent condition, having been transformed into offices that are shared by various modern companies, all of them with websites, etc.

Going back downtown and then going south for a couple of miles along Evesham Road, we find the Royal Enfield Social club, 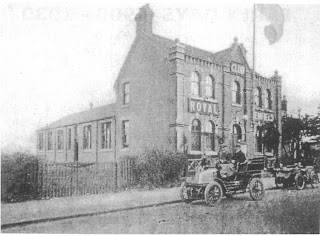 Which is in great condition, 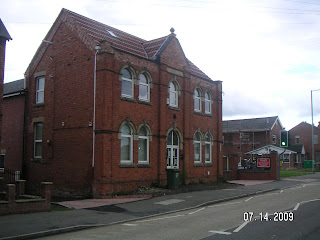 At the back of the building they have built some upscale apartments (in the aerial pictures this portion still appears in construction). 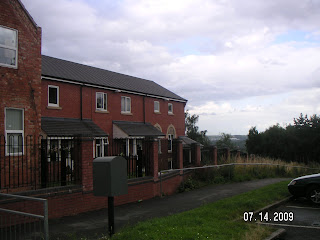 I could not tell what is the function of the old building itself, it is a bit too big to be the administration of the apartment complex. There were signs on the door and windows saying "do not leave bills or debt notices for the apartments in the back at this building" but that was all I could see. I looked around for any evidence of Royal Enfield in it, but nothing was there except for these holes in the bricks that were used to hold the "Royal Enfield Club" signs, 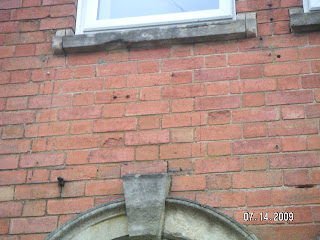 Going back downtown you may recall that after World War II Royal Enfield had opened a showroom in Church Green Street, 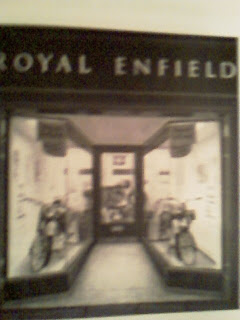 but from the aerial picture we couldn't decide which one it was,

David Blasco had theorized that it was the third building from the left counting from Peakman Street. This is what that building looks like, 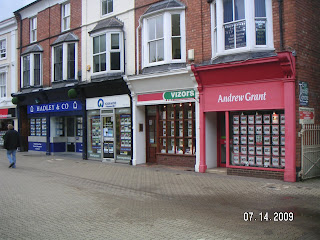 This is the building immediately to its right, which is clearly old, 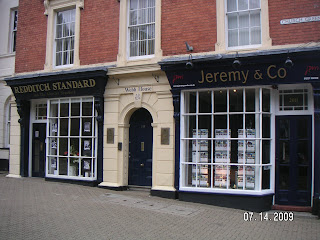 And this is another building across Peakman Street. 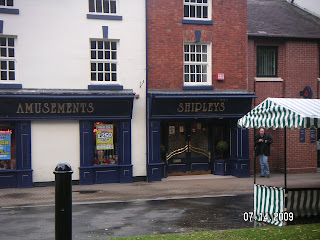 All of them appear to have had their fronts renovated relatively recently, so there is no way to tell which one it was, just by looking. I asked a couple of old timers walking past if they knew, but they didn't. One of them told me "they are in India now anyhow!". It was raining on and off so there were not many people in the street to ask .

In front of these buildings is the town main square and on the other side of it is Market Street. There it was where Royal Enfield bikes were sold before World War II in a store called Bell & Co. 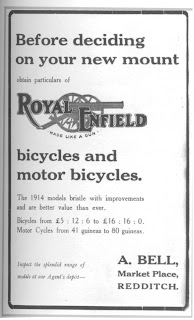 Here is a picture of that store in 1905 (Photo credit: "Redditch Remembered" by Foxall and Saunders). Notice also that there seem to be two A. Bell & Co stores, one in the far left and one further to the right next to A W & A Gilbey, 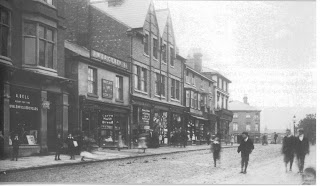 And here is a picture of the same area today. Portions of the store are gone, being replaced by the boxy square building that at some point in the past was the Woolworth store, but a portion of what was the A. Bell & Co store still remains! 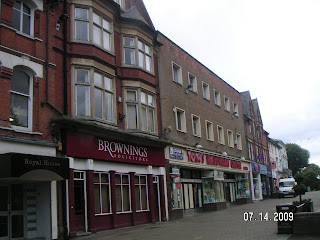 I was planning to go to Feckenham to see factory number 4, but in the end I ran out of time. Feckenham is 7 miles away and there is no public transportation (there is a bizarre bus that runs twice a day Monday, Wednesday and Friday), nor is it a walkable route. I tried to get a taxi to go but two taxis I asked told me they couldn't take me there due to certain rules. It will remain a mystery for the moment being if the building we identified from the air is the factory or not.

I also took a look at the buildings on Bromsgrove Road next to the rail station that the Wikipedia page for Redditch claims were part of Royal Enfield. They look derelict all right, but I have found no evidence Royal Enfield ever had a presence there. In fact other people have commented that this is probably not right in the Wikipedia talk page of the Redditch entry. Funny, if we had looked at that page we would have learned months ago right away that the factory is on Hewell Road and one of the buildings says "Royal Enfield" on the roof!

And that's the memo from Redditch. Have fun!