Where in Redditch? Part IX

It turns out that in our previous post on the subject, I had missed a couple of buildings that remain of the Royal Enfield factory in Redditch. They even say "Royal Enfield" on the roof today! (Click on the picture to enlarge). Whomever owns it hasn't painted the roof in 43 years!

This building is significant, because it was to the left of the central factory building, flanking the main entrance. Many VIP's had their photographs taken on motorcycles there and the building with "Royal Enfield" on the roof invariably appeared in the background. For instance here is Major Mountford with K. R. Sundaram, director of Enfield India in 1963 (photo from "Made in Redditch" by Gordon May). 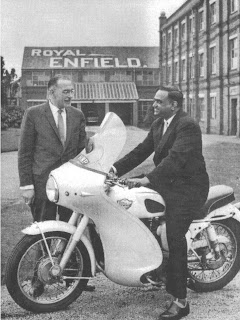