Where in Hunt End? Part II

Redditch historian and Royal Enfield author Anne Bradford says that her interest in Royal Enfield started because local historians claimed that the house she lived in was the Givry Needle Works, which later became the first Royal Enfield factory in Hunt End. It turns out this is not true, the Hunt End factory was destroyed by a fire and there is now an industrial estate in the place it used to occupy. However, it is true that Anne Bradford's house was a replica of the construction that anchored the Givry needle works. Here is what it looks like today, 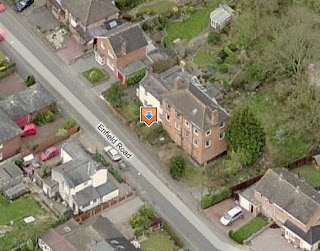 The Hunt End factory survived until the late 1960's being occupied by Dunlop, who used it to store tires. As luck would have it, when Royal Enfield closed in Redditch, Les "Kipper" Gibbs (who had worked at Royal Enfield for 40 years since 1928) had to find a job and found one in Dunlop. One Saturday afternoon, he was the last employee to leave the factory, locking the door behind him. That night was the fire that destroyed the place. So a Royal Enfield man was the last on the premises.

Tire fires are notoriously hard to put out and by the time the fire brigade succeeded, the Givry Works were reduced to rubble. The only thing left standing was the bottom of the exterior wall, which has been preserved in memory of what was once standing there. Remember this is the place where Royal Enfield was born in the 1890's. Anne Bradford in her book "Old Redditch voices" claims that people from all over the world come to take pictures of this wall. If I had known of its existence when I was in Redditch, I certainly would have! 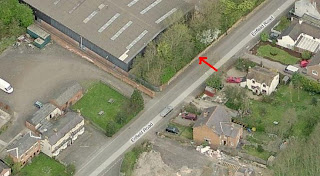