This post is part of the Royal Enfield Virtual museum. If you don't know what that is, visit the museum, you will be able to return here easily. 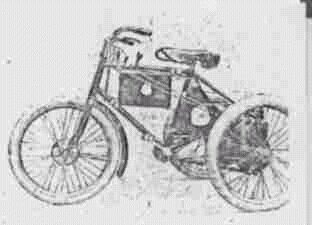 The year 1898 was when all the fun begun. The Enfield Cycle company, at that time headquartered in Hunt End, near Redditch, was manufacturing the Royal Enfield bicycle. It had started as the Givry Needle works in the late 1840's which later turned into bicycle making under the leadership of George Townsend Jr. By the end of the century the company was led by Albert Eadie and R.W. Smith, having been brought in after the company had run into financial trouble in 1891. In 1893 the name "Enfield" made its appearance and later the word "Royal" was added to it. This was supposed to celebrate a lucrative contract for supply of parts they had with the Royal Small Arms factory in Enfield, near London. The company went through several transformations as a legal entity (becoming for a while the New Eadie Manufacturing Co. Ltd. and other names). Then towards 1898 the name becomes "The Enfield Cycle Company", a name it will retain till its UK demise almost 80 years later. On that very year they decided to start experimenting with motor engines. We don't know the precise timeline at the museum, but most texts credit 1898 as the first year of production of motorized vehicles. Two vehicles were produced: a quadricycle and a tricycle. The tricycle is rather mysterious. There is little information about it. There is a blurry photograph we reproduce above. Some accounts state it was introduced after the quadricycle and had a slightly larger engine than the initial quadricycle (269cc vs 239cc).

The quadricycle we know more about. There are several of them around today. Christie's auctioned one in 1995 for 7,475 pounds. There is one on display in the National Motorcycle Museum in Solihull and another in the National Auto Museum in Baulieu. It was featured in the BBC show Top Gear. Another one of them runs the London to Brighton Veteran Car Run frequently. This race is for vehicles built before 1905 (!) and commemorates the repeal in 1896 of the 2mph speed limit and other funny motor laws in the UK that held back development of the auto and moto industry for several years.

The configuration of the quadricycle had the rider sitting like on a regular motorcycle and the passenger in front. The rationale was that in that position the passenger was spared the fumes of the exhaust and mud and other debris kicked up by the tires. The engine was initially a single cylinder De Dion-Bouton 1.75hp 239cc engine with automatic inlet valve and a mechanically operated exhaust valve. During the next two years several developments were made, including increasing the engine displacement. 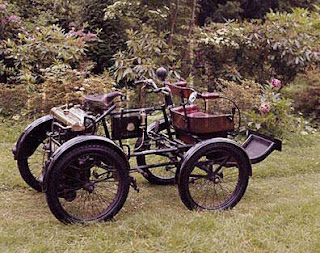 Apparently the mysterious tricycle was just the quadricycle with a different front end. The picture above seems to suggest that. It is rather distinctive how some models of the quadricycle had "The Royal Enfield" written on its side. Although we do not have concrete records, the fact that there are several quadricycles around today indicates that sales of the model were probably good, and sales of the tricycle were probably less successful.