In this year, Royal Enfield modifies the 1901 bike by constructing a specially designed frame rather than using a preexisting bicycle frame. The engine is still on the front fork down tube and drives the rear wheel with a belt. It had an enlarged displacement, 239cc and 2.5hp. Another improvement was the incorporation of belt brakes. The rear belt brake was operated by backpedaling. Also, the Enfield Cycle company claimed in a letter to the editor in 1925 that the drawing below is of a 1902 bike. It looks terribly similar to the drawing normally presented as the 1901 bike in many places. As we discussed in the 1901 exhibit there is a slightly different picture that looks flimsier and therefore possibly more correct for the 1901 bike, but we cannot guarantee it is right. 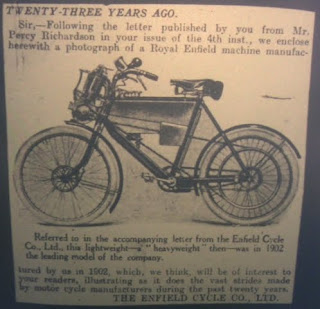 This is the drawing most commonly shown in websites and books as the 1901 bike,

This museum conjectures that there may not exist any pictures of the 1901 bike. Otherwise why would have Royal Enfield submitted a 1902 picture with the letter to the editor when they wanted to show an old motorcycle rather than the oldest one they had? We may never know. Another picture of a 1902 bike, this time from the right hand side, 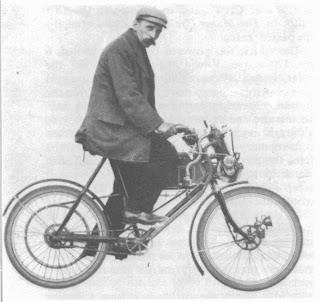