Apparently if you go back before 1900, there were few examples of commercially available motorcycles. A hot item seems to have been the Werner motorcycle of 1897, 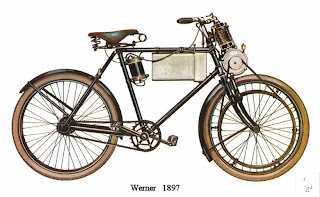 As you can see the motor was clamped to the handlebar and drove the front wheel. Apparently the machine was prone to side-slip. To me the reason appears obvious: the center of gravity was way high. But it appears at the time the reason was less obvious. Royal Enfield thought they had the answer to the problem by keeping the engine in the same place but driving the rear wheel, so they incorporated this in their 1901 machine. (Notice the cute leg protector covering the belt). 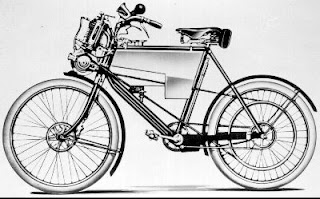 This was the first Royal Enfield motorcycle ever, and unbeknownst to the New York Times, one year before Triumph and four years before Harley-Davidson had motorcycles of their own, But I digress. Turns out that the Royal Enfield was also prone to side-slip. Werner came back with the solution in 1901 by placing the engine below, as we expect in a modern motorcycle, 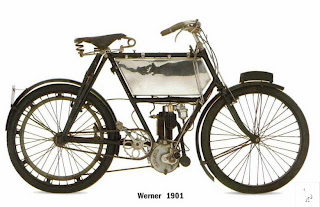 This seemed to work well, so Royal Enfield also wanted to do it. Except that Werner had a patent. What to do? The answer is in two of the three 1903 Royal Enfield models, designed by Jules Gobiet and Bob Walker Smith, here we show the chain driven one (the other was belt-driven and the third one still had the engine on the handlebar), 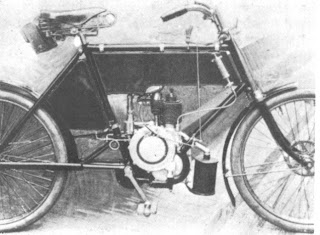 The machine circumvents the patent because in the Werner the engine was a stressed member of the chassis whereas in the Royal Enfield the chassis looped around below the engine! The machine had a complex, patented, transmission. The chain was driven by the "half-time" shaft of the engine, geared down to one-sixth of the crankshaft speed and three cams formed upon it to actuate the exhaust valve and the contact breaker. The chain was used both to drive the wheel and to start the engine. This was the first chain-driven Royal Enfield, some say it is the first "motorcycle" as opposed to "motorized bicycle" produced by the company. The engine was water cooled! All this was reflected on a steep price of £78.75 (75 Guineas), whereas the other bikes were in the 50 Guineas range. That was a huge amount in 1902, according to this calculator it is equivalent to over 5,000 pounds of today if adjusted for inflation or 30,000 pounds if adjusted for incomes. The engine had a glass porthole in the combustion chamber where one could see the sparking of the plug. Sort of like in a built in Colortune plug! (Sources: "The story of Royal Enfield motorcycles" by Peter Hartley (1981))
Posted by Jorge Pullin at 7:00 AM