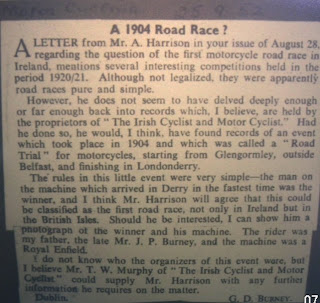 Ducati and Yamaha may duke it out in MotoGP today, but there is something they'll never have. The first motorcycle race in history, was won by a Royal Enfield!

Ok, so we are cheating a little bit. The article reproduced making such a claim is from 1953. More recent investigations have unearthed races as early as 1897 in Europe and 1901 in the US. In fact, the FIM was created in 1904. But I bet you can claim that of the current motorcycle manufacturers, the one to win the earliest race was Royal Enfield! And that was the first motorcycle race in Ireland. John Burney on a belt-driven Royal Enfield beat the second racer by 45 minutes on a round trip from Belfast to Londonderry! Oh, and the bike in the picture is one of the three 1903 models (one had the engine on the handlebars like the 1901 and the two others had the engine below the rider, one with chain drive, one with belt). I think it is the only picture still in existence of that particular model of Royal Enfield! 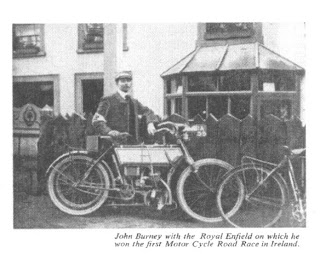