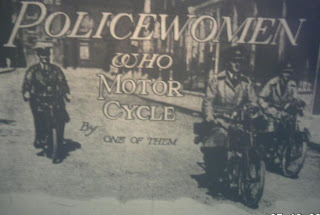 This was in the UK in 1917. The chosen machines were Royal Enfield 2.5hp two-strokes. Excerpts quoted below are from an article in The Motor Cycle, July 5th, 1917. The article does not say, but I assume the riders were serving in the London Metropolitan police, which had policewomen associated in various ways with the force since 1914. Apparently these were the first police forces (male or female) on motorcycles in the UK!

I don't seem to have the complete article, in particular the writer is not identified by name, but it is one of the officers. Here are some excerpts:

"We never dreamt of motor cycling until three months ago. We had only once seen a woman on a motor cycle near Lewes, and we thought her a wonder. We ourselves were content to confine our motor experiences to such steady going cars as a Singer, a Hillman, or a Ford... but Fords need more petrol than motor cycles and when we made an application for petrol licenses for our work we were given the reply which I understand is now universal-- 'This officer is recommended to try a motor cycle.'"

"We now think we owe them a debt of gratitude, for not only are we ensured a "mount" for any emergency... but we have entered into a new sport more exhilarating and refreshing and exciting than any we have previously gone in for. We all think a ride which presents problems of hill climbing, traffic threading, or (this must be whispered, for, be it remember we are policewomen!) pace - making, beats the joys of skating, skiing, shooting, tennis, boating, or hunting, which we once though unsurpassable."

The writer then goes on to explain their experience as beginner riders, including hill climbing in a place that gave them trouble. She claims "The booklet 'Hints and Tips to Motor Cyclists' is a most helpful friend to the beginner, in which the writer advises the would-be hill-climber with a single gear to smoke a pipe at the foot and have a good think while the engine rests and coools!"

"We did that -minus the pipe- at the foot of Sevenoak Hill with the result that our two machines sailed up with a high-note hum, and passed all our brother-wheels on the way." 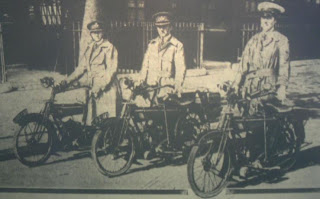 "Now for a few words about our mounts. None of us had motor cycling friends, so we had to make our own choice. And we had no knowledge whatsoever, only the memory of a sound- the sound of a purring engine. I expect the grand mechanical readers will smile at the queer way women set about things, but we wanted motor cycles with a sound like the one we remembered. We know nothing of names or makers, but we found our sound twice over, in the Levis and the Enfield, and we have since learned to recognise the note as the unmistakable purr of the two-stroke engine. We couldn't have two motor cycles each, so we had to choose between them and chose the Enfield. This was because we were aspiring to the Enfield 3hp twin to go on with, and one of us is going still further to the 6h.p. twin with a sidecar."

A later article in Motor Cycling confirms what the rider explains in the article, in 1918 they added other Royal Enfield models and points out that in the US police forces had been riding motorcycles for some time.