With the demise of the Enfield Autocar company in 1908, Royal Enfield decided to reconsider the production of motorcycles. The UK market was picking up and it was decided to re-enter it. The Swiss engineer (ex-Belgian FN) W. Guillon was offered a post under Bob Walker Smith in the design department of the Enfield Cycle company to design and develop a motorcycle. The result was shown in the Stanley Show of 1909. A motorcycle powered by a 297cc Motosacoche side-valved V-twin. It had 2.25hp, belt drive with a fixed ratio, magneto ignition,hand pump for lubrication and front forks with "Druid" pattern. The Motosacoche engine choice seems to have been a hit, it proved very reliable and the motorcycle would become a lasting success. 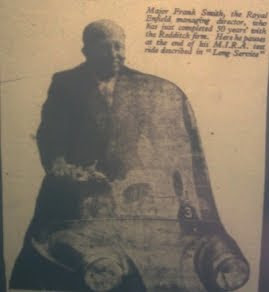 Another important development was that Frank Smith, the eldest son of Bob Walker Smith joined the firm. He was 21 years old and had studied at Quinton College and Birmingham University and had apprenticed at BSA. Frank (later "Major") Smith would eventually run the whole company until his death in 1962, an event, compounded by the death in 1963 of Major Mountford, that some claim provoked the demise of the UK company in the late 1960's.

A separate development is that Alfred Scott started producing his innovative two-stroke motorcycles at that time and found that he could not keep up with the production of frames, so he subcontracted work on them to the Enfield Cycle Company. The Scott machines created quite a sensation, they overtook the competition so easily in racing that racetracks started penalizing them for being too efficient. One of the Scotts was the first machine to average 50mph in the Isle of Man TT.

Meanwhile bicycle production continued to flourish. Here are some ads from that year, 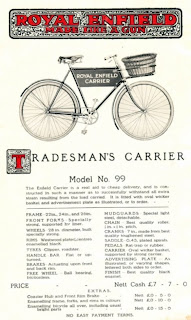 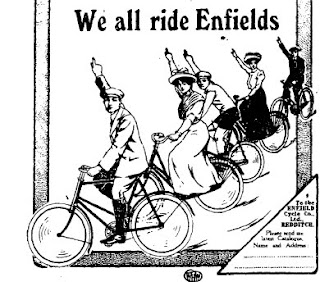