The V-twin motorcycle with Motosacoche engine introduced in 1909 continued to be sold without many changes in 1910 and seems to have proven very popular. Not many pictures seem to remain of the 1910 bikes, but it appears they were quite successful in races, which at the time were a very important promotional tool. The picture on the left, in period-correct khaki colors, and the one below, found on the internet, suggest there are still some of these 1910 machines around, which probably makes them the oldest Royal Enfields still in existence. 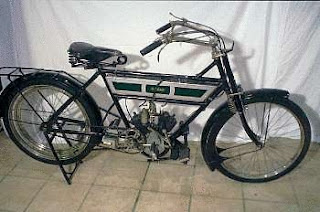 H. Greaves rode a 2.25hp V-Twin in the Auto-Cycle Union Land's End to John o'Groat's Trial. He completed the run without losing points. In the July Auto-Cycle Union (ACU) trials Greaves, together with Royal Navy Lieutenant H.T. Bennett and P. Islip entered their Enfields. Greaves and Islip had non-stop runs and Greaves got a gold medal. Lieutenant Bennett unfortunately had an accident an did not finish. Islip and Greaves entered the October ACU trials and had non-stop runs. There were also gold medals for Enfield riders in the Six Days' Trial and two gold medals in the Edinburgh to London reliability trial towards the end of the year.

In November in the Olympia motor show, Royal Enfield had a large display. It included a new 2.75hp V-Twin. This motorcycle would bring great prestige to the firm in the years preceding World War I, in particular due to its racing successes.

The introduction of a V-Twin was lauded as an innovation. In "The Motor Cycle and Cycle Trader" of March 17th 1916, Mr. Paskell said that there had hardly been any bike introduced in the UK that did not copy the Triumph. "Almost the only notable exception which did not join the rank for the 3.5 single is the Enfield, due perhaps to the independent 'never follow anyone' style of a man, that mechanical genius, R. W. Smith"

(Source: "The history of Royal Enfield motorcycles" by Peter Hartley and "Royal Enfield, the Story of The Company", by Anne Bradford)