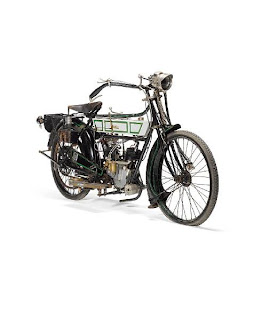 The machine presented in the Olympia motor show in November 1910 had a Motosacoche engine of 2.75hp and 344cc. The engine was quite different from one used in the 2.25hp smaller machine which continued to be sold in 1911 (with single gear or with a three gear gearbox and still in khaki). The larger engine had parallel sidevalves in the front of the front cylinder and the back of the back cylinder. The machine depicted at the left was sold by Bonhams in 2008 for 10,350 pounds.

The engine had horizontal fins parallel to the ground. It had a bosch magneto, and a two speed gearbox controlled by a rotating lever on the tank. Both the magneto and the lever are quite visible in this picture, 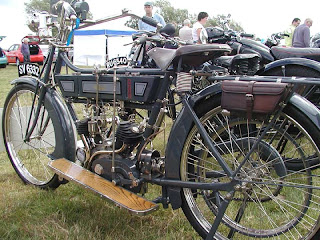 The exhaust was routed to a silencer at the front of the engine and included an engine cutoff pedal. The floorboards were rubber covered and the machines were finished in khaki with highlights of black enamel. The restorers of the models displayed in this exhibit seem to have taken some liberties with colors and wood floorboards. The chain was neatly encased. A remarkable aspect is the "clean" handlebars, with all the control cables enclosed inside the handlebars. The springer front suspension, the raised headlight and the discretely valenced fender gave the machine a quite unique and elegant look. 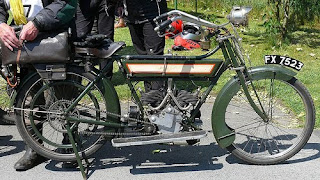 Through connections of the London Motosacoche representative, which supplied engines, Royal Enfield got Bert Colver to race the 2.75hp machine. This was a great stroke of luck for the company since Colver was a talented racer and tuner.

The first race Colver participated in was in Brooklands, at the fourth monthly meeting of the British Motor Cycle Racing Club (BMCRC). Brooklands was the first purpose built motorsport venue. Today it hosts a museum and two thirds of the track are still there.

The race consisted in running for an hour, under the new rules of the Isle of Man TT. Colver was running a street machine (there had not been time to do serious tuning) whereas the other riders had specially modified and tuned machines for racing. Nevertheless he finished third covering 44 miles. The winner covered 54 miles. 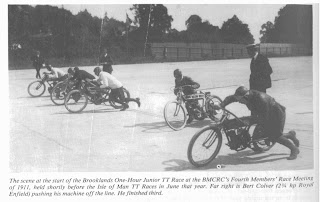 At the Isle of Man TT, the new (for motorcycles) mountain circuit consisted of four laps of the 37.5 loop. In the past motorcycles were not considered capable of climbing the hills. The winner was on a Humber (six of the 25 riders rode this fast machine) and the Enfield rider, H. Greaves, finished fifth.

In August Colver reappeared in Brooklands with a much better tuned machine. He won the event running 54 miles 122 yards, only 604 yardes short of the course record. He reappeared in the September event but was not so successful finishing fourth. 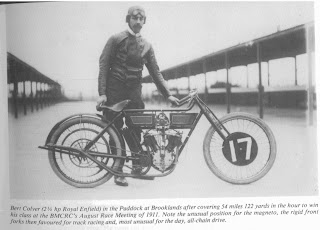 (Source and black and white pictures: "The history of Royal Enfield motorcycles" by Peter Hartley).