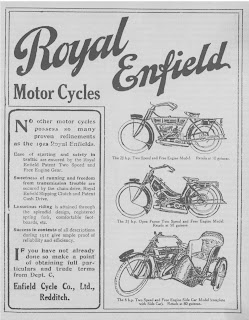 At the November 1911 Olympia show, Royal Enfield presented three motorcycle models for 1912: the 2.75hp sidevalve twin, now with an AMAC carburetor, an open frame 2.5hp single cylinder 241cc engine and a 6hp sidecar combo. The 2.25hp twin of 1909 had been discontinued. All models now sported the patented Enfield two speed transmission, floorboards instead of footpegs and sprung front forks. The open frame model was destined to ladies and professional men that did not wear special motorcycle clothes. 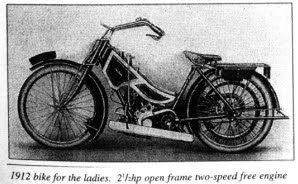 It featured the patented Enfield cush drive in which the rear wheel was driven by the sprocket through rubber pegs. It would become a feature unique to Royal Enfield motorcycles that is still with us in the Bullet today! 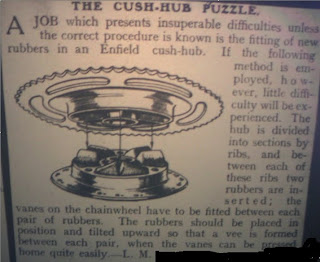 The sidecar model was powered by a 771cc V-twin provided by John Alfred Prestwich Industries (JAP). A new factory in Hunt End was inaugurated to accommodate the increased production. 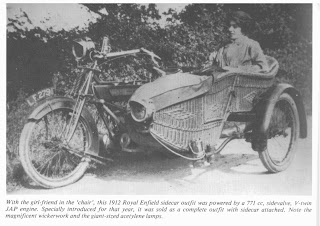 On January 29th the Transport Committee of the War Office held private speed trials at Brooklands to find out a motorcycle suitable for military application. All the leading motorcycle brands were present. Bert Colver rode his 2.75hp Royal Enfield and made the second fastest lap time at 39mph. 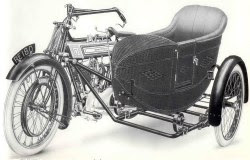 The sidecar combo will prove a very successful and lasting model. In "The Motor Cycle" of 18th June 1914 it is claimed "The beauty of the Enfield gears is that it is impossible to damage the gears in changing, no matter how clumsily the operation be performed". "The British Trade Review" in July 1916 dubbed it "one of the most economical motorcycles in the world". It sold for 80 Guineas or 100 if fitted with Lucas electric lights.

Many manufacturers, including Royal Enfield, boycotted the Isle of Man TT in 1912 in protest that the events were getting too far removed from the original intent that was to have races of standard motorcycles. Instead Bert Colver went to Brooklands in July with a new Guillon-designed experimental 2.75hp machine with a V-twin JAP engine with an outside flywheel and with a chain driven magneto mounted on top of the engine. He was not lucky, breaking a valve, and having the wrong spare, forcing him to abandon the race. He had more luck at the British Motor Cycle Racing Club (BMCRC) Open Championship Race, also in Brooklands. He finished second covering 53 miles in an hour. This 2.75hp machine would be the basis for a 3hp machine to be introduced in 1913. Here is a picture of the experimental machine, slightly incorrectly labeled a 1913, it appears to have survived! 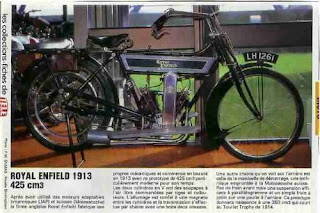 (Source: "The history of Royal Enfield motorcycles" by Peter Hartley)