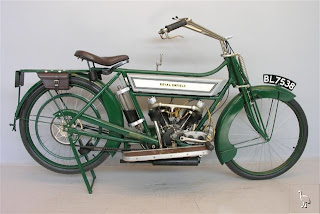 The 2.75hp machine designed by Guillon and raced by Bert Colver in Brooklands in 1912 was the basis for a new 3hp machine introduced in the Olympia show in November 1912. In addition to that were the 2.75hp and 6hp machines, similar in details to the ones that had been sold in 1912. All of them had kickstarters. The new 3hp machine had a V-twin engine of 424cc. It had an unusual lubrication system in which the oil tank had been placed behind the seat tube of the bike and made of glass. It was one of the earliest examples of a dry-sump lubrication system. And one could readily tell if it was working or not by visually inspecting the tank! Dry sump lubrication would not become commonplace until almost twenty years later! All three machines had improved longer exhaust systems.

The "3hp" was an instant success worldwide. In Cairo, a gentleman named Flowers rode up Mount Olympus (6000 feet) with a 200lbs passenger. In Sydney it won a 10 mile race at 54.5mph. Racing successes would continue in years to come. 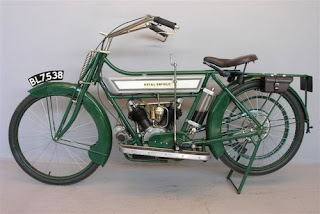 Bob Walker Smith was elevated to joint managing director together with J. W. Davis. The chairman of the company was still Lord Ernest Seymour. The three men were keen on returning to the Isle of Man TT and managed to convince the other directors. Towards this aim, Bert Colver continued testing a reduced capacity 2.25hp version of the 3hp machine in Brooklands. 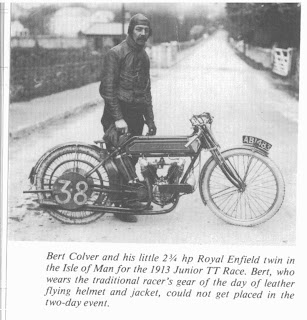 In April in the second BMCRC monthly race he placed second at 48.92mph. Five of these machines ran in the Isle of Man Junior TT. The riders of the official Enfield works team were H. Greaves, E. Keyte and Bert Colver and in addition C. M. Down and Douggie Alexander competed as amateurs. The event consisted of two laps on Wednesday and four laps on Friday for those who survived the Wednesday event. Only Down and Greaves of the Enfield riders survived, and on Friday placed 16th and 17th. 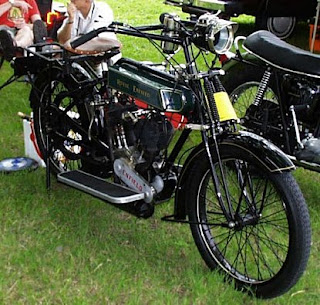 The Enfield riders (this museum loves the sound of "the Enfield riders") fared much beter in Brooklands later in the year in the marathon Six-Hour Multi Class Scratch Race. Colver, Keyte and Greaves placed second, third and fourth, giving Enfield the Manufacturers Team Prize. 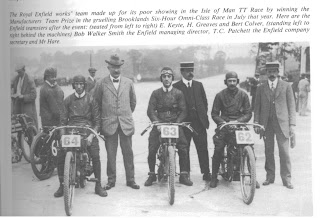 The race was won by Hugh Mason on a NUT Twin, 23 miles (!) ahead of Colver, who averaged 50.26.mph. Bob Walker Smith was present at the race and naturally was delighted with the performance. 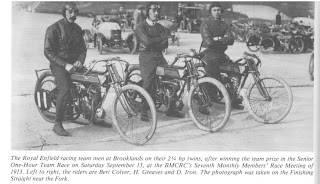 Enfield also did well in foreign races. This included a win in the 300 mile Indian TT race from Calcutta to Gaya over very difficult roads. The 2.75hp also won the Bloemfontein Hill Climb in South Africa and the Svenska MK Reliability Trial in Sweden.

The racing successes motivated the company to participate in more races. In the August Brooklands race Bert Colver and D. Iron entered on their 350cc Enfields. They were not fortunate. In the September meeting Greaves, Iron and Colver entered in the Six-Hour Race which was open to teams of three machines of any type under 1000cc. The Enfield trio covered a combined 155 miles 684 yards to win the event.

At the October event in Brooklands, Colver took out his machine with a sidecar attached and scored a victory in the One-Hour Passenger Race, covering 40 miles 98 yards, a new world record! He proceeded to detach the sidecar and line up for the next event together with his teammate Greaves. They placed fourth and third respectively in an event that was a one hour solo run.

(Sources and B&W photos: "The history of Royal Enfield motorcycles" by Peter Hartley and "Royal Enfield, the story of the company" by Anne Bradford).