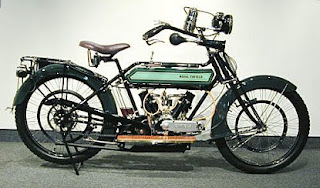 The 1914 line of bikes presented at the Olympia show was essentially the same as those of 1913, with some small changes. The 731cc big twin sidecar had proved immensely popular, so it received some upgrades like a casing enclosing its chains and the clutch. The hand operated oil pump was equipped with a two way tap that could route oil to the engine or the gearbox. Handlebars, wheel hubs and frame were painted a cool black. The handlebar and footboards were sprung to improve the smoothness of the ride. Several types of sidecars were offered, including one with extra ground clearance for overseas markets. The 424cc machine was available in roadster or TT design. The TT model had no kickstarter and handlebars slightly dropped. The 2.75 sidevalve machine remained unchanged with respect to the previous year. 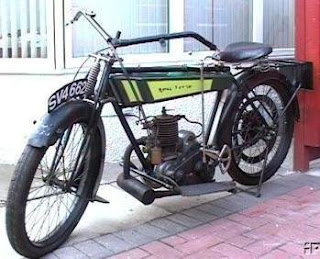 The factory was turning out 60 sidecar combinations every week in 1914. There were many variations in the sidecar, including tradesman's box used by bakers, plumbers, newspaper vendors, laundry men, fire brigades, milkmen,even furniture movers. With the passage of the Cat and Mouse Act the year before, sufragette activity was galvanized and Royal Enfields were even used for political purposes, 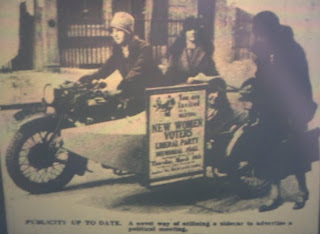 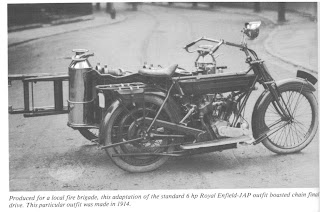 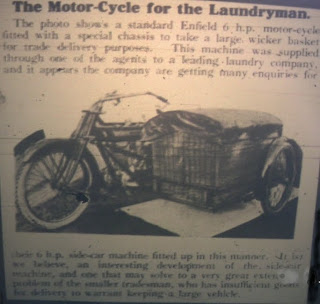 On the racing front, Enfield lost Bert Colver, who rejoined H. Collins and Sons at Plumstead. However, several new riders joined the factory team. At the BMCRC second monthly race in April, E. Keyte, H. Greaves and F.E. Wastling entered the 26 lap race for machines up to 350cc. Wastling rode an experimental 347cc with auxiliary exhaust ports. For a while Greaves was in the lead but ended up second at 54.17mph. Wasling was third. In the may event Keyte won the event at 57.89mph and Greaves came in second. 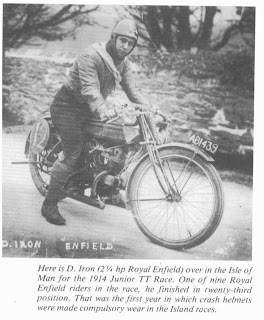 The Isle of Man TT now required riders to wear helmets. There were nine Royal Enfield entries ridden by F. H. Walker, E. Keyte, H. Greaves, Doug Prentice, B. Alan Hill, D. Iron, Bill Sheard, Douggie Alexander and F. E. Wasling. F. J. Walker moved early into the lead, followed by Douggie Alexander whose bike's seat fell off and forced him to ride the rest of the race sitting on the tank. Walker eventually lost his lead due to a puncture. He repaired the puncture and resumed the race, trying to make up for lost time, but fell from his bike. Amazingly, he managed to finish third at 43.72mph, but then tragedy stroke: apparently he had received a concussion in the crash and crossed the finish line disoriented, confused by spectators that blocked the view of the finish line, so he did not slow down. He continued at race speed and took a wrong turn, crashing into a road barrier. He would die in a hospital a few days later. Keyte finished 8th, Greaves 15th, Alexander 18th, Prentice 20th, Hill 21st, Iron 23rd, Sheard 26th. This is Alexander with his bike, 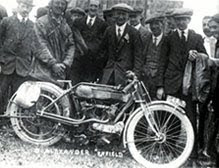 and this is F. J. Walker's bike, now preserved in the National Motorcycle Museum in Solihull, 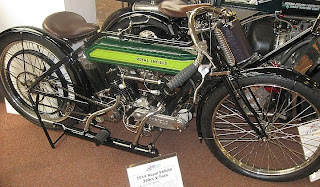 At the 56 lap Junior Brooklands TT race in June Keyte was second, Prentice fifth, Wasling sixth and Iron seventh. Greaves and Keyte reappeared in Brooklands in July and finished second and third respectively in the ten mile scratch. In the last event of the day, a three lap passenger handicap Greaves won easily. At 47.58mph, his machine also broke the speed record for a sidecar, but this was not officially accepted due to an obscure rule that forbade setting records in handicap events. 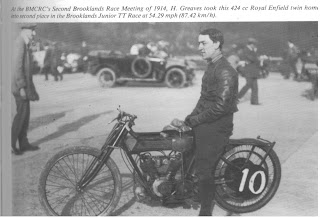 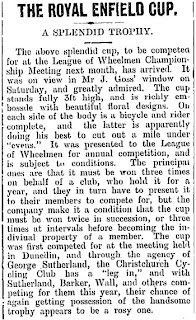 Something we have not emphasized enough is that Royal Enfield was a global company with strong export markets from the very beginning, starting with its bicycles in the late 1800's. For instance, the left picture shows an announcement for the Royal Enfield cup, a bicycle race, published in the Wanganui Chronicle, 30 January 1899 in New Zealand. Another example is this picture from 1914 of a Royal Enfield motorcycle in China, having a bit of trouble with the poor conditions of the roads. 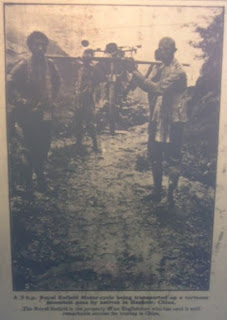 Frank Walker Smith, who had been promoted to the joint manager director with John Davis in 1912, was offered this year a vacant seat on the board (he was 25 at the time). He was very energetic and full of innovative ideas, like the organization of a factory outing (one of the first in the industrialized world). Over 100 Enfield workers went to Matlock Bath and explored the caves, visited Haddon Hall and had lunch at the New Bath Hotel. This was intended to become an annual event. These were happy days for Enfield and its workers, the company was doing quite well. Unfortunately dark clouds of a very different kind were building in the horizon. 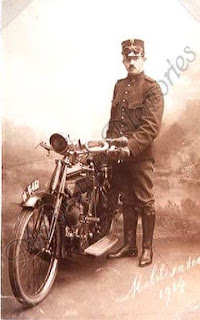 A month after the Brooklands race, the assassination in Sarajevo of the Achduke Franz Ferdinand took place and a few days later the German army started mobilizing in the Western Front. With the outbreak of the war, Frank Walker Smith, joined the Royal Artillery. Guillon, the Swiss-born Royal Enfield designer left for his home country.

(Sources: "The history of Royal Enfield motorcycles" by Peter Hartley and "Royal Enfield, the story of the company" by Anne Bradford).