Royal Enfield motorcycles returned from India to the UK in 1977, imported by the Slater brothers. They showed what they called "the Madras Bullet" 350 in the Earls Court show of that year. But apparently there were much earlier attempts to introduce in the UK the machines made in India. Royal Enfield UK closed for good in June 1970 having been operating out of the Westwood underground quarry since the demise of the flagship Redditch factory in 1967. The last bits of the company were acquired by Norton Villiers Triumph (NVT), including the controlling interest in Enfield India, according to the article in the picture (I read elsewhere that by Indian law of that time, 51% of the company had to be in local hands, but perhaps there were several investors from India). 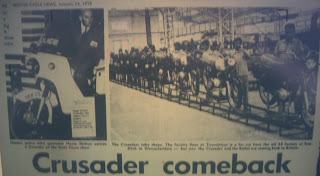 In the Earls Court show of 1972, NVT presented Enfield Crusader machines manufactured in India, as the accompanying article shows. This was, by the way, not the first attempt to introduce Indian made machines in the UK (see Enfield Fantabulus). Notice the bizarre picture of a Royal Enfield police bike being displayed in a Norton stand on the left. The bikes were equipped with two stroke 175cc Villiers engines instead of the four stroke 250cc that used to be in the UK Crusaders. There were plans of selling to police and apparently they were really trying to get things going. They talk of later selling to the public and even of reintroducing the legendary Bullet! Whatever happened after that I don't know. It is worthwhile remembering that NVT was also sailing into exceedingly difficult waters at that time and a few years later would also find its demise. Cancellation of projects seemed to be their de facto corporate strategy, so I wouldn't be surprised if the project was just abandoned. Interestingly, as we will see in another post, Enfield India considered buying the Triumph Meriden factory when NVT finally collapsed! I also could not find what happened to the controlling interest in Enfield India NVT had. Until the early 1980's it was in the hands of Manganese-Bronze Holdings, the parent company of NVT. Incidentally Manganese-Bronze still exists, mainly producing the famous London taxicabs. Presumably Enfield India bought that share back at some later point? Or it was settled when Eicher acquired Enfield India? What were the NVT executives thinking introducing the Madras-made Crusaders is an enigma. One should recall that Enfield India has made enormous positive strides in quality improvement since 1970, which suggests that at that time quality was probably significantly worse than that on the average UK-made bike. And at that time UK made bikes were losing the quality battle big time to the Japanese imports. How were those Crusaders supposed to compete? Perhaps they were thinking that the Pound/Rupee differential would cover up for everything?

I reproduce the rest of the article below. It talks about the history of Enfield India and has a nice take on the creation of an industrial engine division producing small 37cc engines for irrigation and the big impact they had on the food supply in India. The article does not say, but apparently the little engines produced in a plant in Toraipakkam, 25 miles south of Madras, were vital in keeping the company afloat during a four month strike and lockout of the main Tiruvottiyur motorcycle plant near Chennai in 1966. The article claims already Enfield India was exporting to Australia, Nepal, Ceylon, Africa and the Middle East. 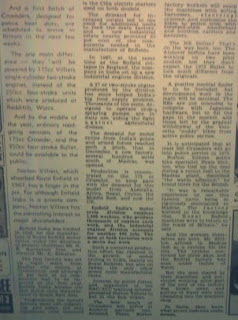