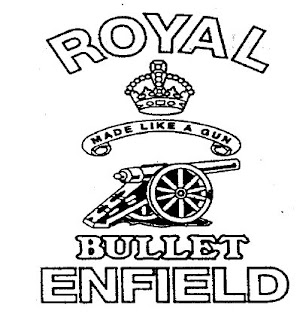 In 1994 Banavar Products Limited, which at the time was the UK importer of Enfield India motorcycles, applied to register the name Royal Enfield in the UK. Later the application was transferred to Eicher Limited - Royal Enfield Motors unit. The registration was challenged by David Matthew Scott Holder of the Velocette Motorcycle Company (VMCC). You can read the whole proceedings here. Below I paraphrase the proceedings in order to make them more easily readable.

The name ROYAL ENFIELD was first applied to motor cycles in 1898 by the Enfield Cycle Company Limited which sold motor cycles by reference to the ROYAL ENFIELD trade mark for approximately 70 years. Enfield Cycle also manufactured pedal cycles but this part of the business was sold off in 1966 or thereabouts. Enfield Cycle split into two divisions in 1966/67. ROYAL ENFIELD twin cylinder motor cycles and their spare parts continued to be manufactured and sold by Enfield Cycle’s sister Company, Enfield Precision Engineers Limited (hereinafter referred to as “Enfield Precision”) based in Bradford on Avon. The business in the ROYAL ENFIELD single cylinder motor cycles, and their spare parts, was sold to Veloce Limited, who were also referred to in the trade as Velocette. In 1971, VMCC acquired the business of the “manufacture of motorcycles and motorcycle spare parts” from Enfield Precision, for the twin cylinder ROYAL ENFIELD motor cycles. Later in 1971, Veloce Limited went into liquidation. The assets of this company, which included the business of the manufacture and sale of spare parts for the ROYAL ENFIELD Single Cylinder Motor Cycle (and also the Velocette Motor Cycle) were purchased by C C Cooper Limited who sold the whole of the business and all its assets to Mr. Holder's father. The transfer of the assets was referred to in the press at that time. Mr Holder says that VMCC have used the name ROYAL ENFIELD continuously since 1971 in relation to the production and sale of spare and replacement parts for ROYAL ENFIELD motor cycles. He produced sales figures ranging from 100,000 pounds in 1984 to 1 million pounds in 1994 of sales for VMCC of which about 20% were allegedly related to the Royal Enfield brand. The goods were not generally advertised because the customers were dealers and not the general public. Due to the specialized nature of the classic motor cycle business customers are enthusiasts or collectors who pass information by word of mouth. He presented some evidence of this including promotional brochures and materials. He also claimed that Banavar attempted to purchase the brand from him in 1989 and presented correspondence as evidence for this. Eicher replied that Mr Holder has not provided proof of the acquisition of the trademarks formerly owned by Enfield Cycle Company and that to the best of their knowledge all trade marks formerly registered in the name of the Enfield Cycle company were allowed to lapse in the 1970s. They also denied approaching Mr Holder in 1989 about purchasing the trademarks, claiming they were just investigating what was the situation rather than acknowledging that Mr. Holder actually held the trademark. In the previous 10 years Eicher argued that they had been marketing and sold motor bikes bearing the Royal Enfield mark in the UK and had established a dealership network and participated in many outside events. During that time they had not been aware of any products marketed or produced by Mr. Holder under the name Royal Enfield nor had they been aware of any confusion in the marketplace.

At the end of 1995 they applied to register Royal Enfield (UK) Limited as a company name. They exhibited a copy of a letter from the Home Office (to their trade mark attorneys) indicating that there would be no objection to the use of this name. Finally they described attempts made through trade and press contacts to discover more information about Mr. Holder. A letter from Mr R S B Wilson, a writer on British motorcycles, was exhibited which was presented as typical of the responses received in that none of the people spoken to were aware of any use made by Mr. Holder of the ROYAL ENFIELD mark.

Mr. Reynolds, for the Registrar of the Comptroller general, found against Mr. Holder. The explanation is lengthy, but basically it relies upon the lack of evidence that the brand Royal Enfield had been properly handed to VMCC through the various complex last years of what formerly was the Royal Enfield company. Also, there was no evidence that the brand had been passed along by Mr Holder's father to his wife and then to his son after his decease. Mr. Reynolds also considers the possibility that even without this lack of evidence, Mr. Holder could have acquired the use of the Royal Enfield brand through common law by establishing a business and reputation associated with that name, but finds the evidence insufficient.