The US wing of the Royal Enfield museum

This post is part of the Royal Enfield Virtual museum. If you don't know what that is, visit the museum, you will be able to return here easily. ============================
David Blasco was wishing that Gordon May would chronicle the history of Royal Enfield in the US. To his great disappointment all he got (up to now) is this museum wing! :-) 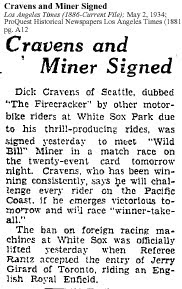 It is not entirely clear to this museum when were Royal Enfield motorcycles first introduced to the US. It appears that pre World War II the US motorcycle market was largely isolated from the rest of the world. There were importers that would bring machines one at a time, but there appear not to have been dealer networks, etc. for foreign motorcycle brands. There is a reference to a Royal Enfield machine racing in White Sox Park in the LA Times of May 2,1934. It is unclear what White Sox Park they are referring to, but it was in California and the newspaper in a previous article claims "it is believed to be the only motorcycle of this type to be ridden on Pacific Coast short tracks". The article reproduced at the left speaks of a foreign machine racing ban up to that point, so we gather that foreign machines were not very popular. It appears some machines like that one made it into the US via Canada and other routes as well. 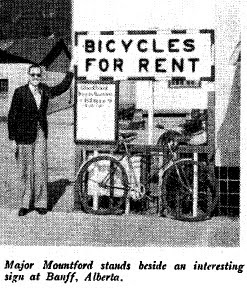 After World War II, Royal Enfield started serious efforts to sell in the US. Major Smith, Major Mountford and Miss Jean Smith, Major Smith's daughter, toured the US and Canada in 1946. Their flight from London to New York had stopovers in Shannon, Ireland and Gander, Newfoundland. They stayed ten days in New York and arranged for an American distributor, Mr. Edward Stokvis of Whitehall Distributors Inc. to sell the motorcycles in the US. Mountford continued to Los Angeles via Atlanta (where he explored sales in the US South) and met Smith who had flown "directly" (with stopovers in Philadelphia, Cleveland, Chicago, Denver and San Francisco). In LA they met the owners of Glendale Motors, "Rolly" Harper and Bill Thompson, who would eventually represent Royal Enfield in the West Coast. Smith and Mountford were surprised to know that Glendale Motors had tuned a Royal Enfield 350 to go up to 89.77 mph.

From LA they flew to Seattle and took a boat to Vancouver and by rail to Toronto contacting Canadian dealers, in particular Percy McBride in Toronto who had been distributing Royal Enfields in Canada's eastern provinces for some time. 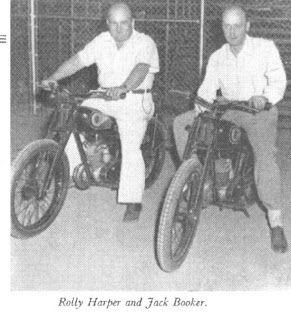 In 1947 Jack Booker, trials exponent and superintendent of the Royal Enfield factory visited the US to organize the service departments in collaboration with Whitehall Distributors in New York. Many dealers visited New York during Booker's week-long stay in the Big Apple, including Walter Grim of Chicago and the Ellis Brothers of Spartanburg, SC. From New York Booker flew to LA and met with John Stokvis, vice-president of Whitehall. He spent another week there with the staff of Glendale motors. Booker and Stokvis even raced in the Los Angeles Speedway on Royal Enfields against each other (Booker won). From there they went to San Francisco where they visited Frank Servetti, who covered that area for Royal Enfield. From there they proceeded to Kansas City to meet Karl Grassow, Whitehalls technical representative and visit Whitman Motors, who handled Enfields in that city. From there to Peoria, IL where Lofthouse Motors was the local rep and to Kinder Cycles at Fort Wayne, IN, where Jack Booker visited the Lincoln memoriaal. The trip continued to Detroit to visit Edward Keogh. A cross to Canada via a boat and a flight from Toronto to London on a Pan Am Clipper ended the trip. 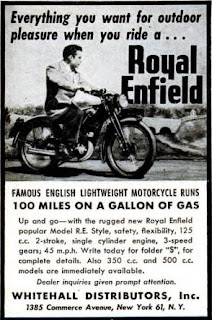 In 1948 it was the turn of Major Mountford to make a trip. He sailed in the Queen Elizabeth stopping in New York to talk to Whitehall Distributors and then went on a trip to various dealers, including Allen Bejamin of International Motorcycle Sales of Chicago, Edward Kehoe, president of Kehoe Motors in Detroit, Joe Crans of the West Virginia Cycle Co. of Huntington, WV (he owned many businesses in the area and passed away last July 7th). Also D. Rogers of Island Motorcycle Sales of Floral Park, Long Island and W. Wesidan, of Garwood, NJ. Showing that the world is a small place, while waiting for a train in Buffalo, NY, Mountford encountered by chance Mr. Gilbert Smith of Norton Motors, also touring the US with similar intentions as Mountford. 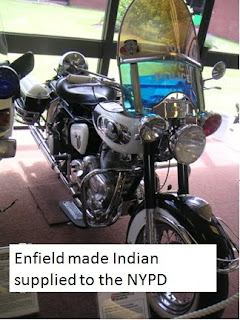 It is a well known piece of history that between the years of 1955 and 1961 Royal Enfield made motorcycles were rebadged with Indian names and cosmetically modified. The models had specific names: Chief, Trailblazer, Apache, Tomahawk, Woodsman, Westerner, Patrol Car, Fire Arrow, Hounds Arrow, Lance. The complete list of models and many pictures can be found here. About 6,000 such machines were imported. Some of the models saw only very limited distribution. Several police departments adopted these machines, and the lineup included a specific model for police duty. 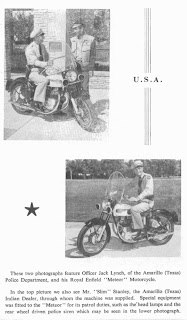 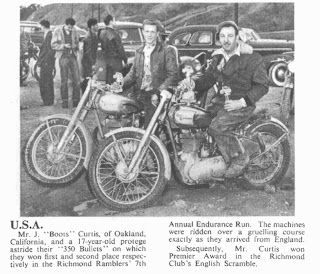 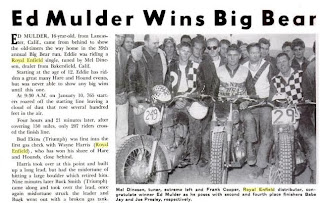 Of course Enfields were raced in the US and achieved some limited success. In 1952 Enfields took first and second place in the Richmond Ramblers' 7th endurance run. 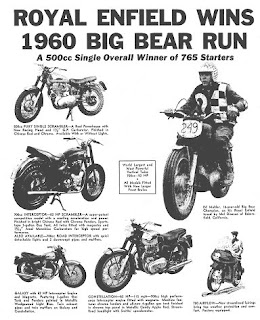 In 1960 a Royal Enfield rider won the Big Bear Race, with 765 participants! Whitehall motors actually had a team of racers. 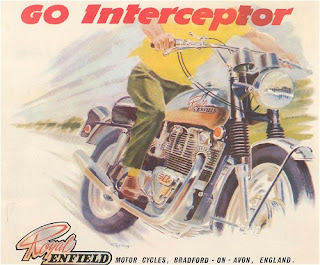 The Enfield motorcycle company started to glide down the path of destruction in the UK in the early 1960's with the death of Major Smith, Major Mountford and the sale of the company to the E. H. Smith conglomerate. During those last years the US market was seen as the route to salvation. In particular the big twins started getting bigger and bigger (and more and more unwieldy) in response to the requirements of the US market. The final last attempt to survive, with the 750cc Interceptor, in fact saw the motorcycle exclusively exported to the US for a while between 1965 to 1968. In 1967 the Redditch factory closed and production concentrated entirely on Interceptors in the underground quarry in Westwood, Wiltshire. Towards the end Velocette frames were being used, the only thing produced in the Westwood factory being the Interceptor engines. The company folded for good in 1970. 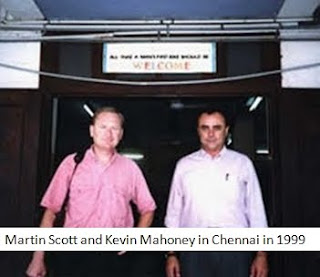 Fast forward to 1995. Marty and Debbie Scott decide to start importing Enfields from India to the US. In an incredible feat, they single handedly were able to get the Enfields EPA and DOT certified on their own. Among other things, this required the infamous left-hand shift linkage to make them compatible with US standards. It should be remembered that Enfield was not doing all that well at the time (this was before Eicher and Siddartha Lal were brought on board) and quality was very poor. In spite of this a Bullet Owners Club was formed and was doing very well. Towards 1999 Classic Motorworks appeared with Kevin Mahoney becoming the new distributor in the US and that brings us to today. This museum believes in primary sources so instead of retelling the story we refer you to the nice chronicles by David Blasco of this period here and here. 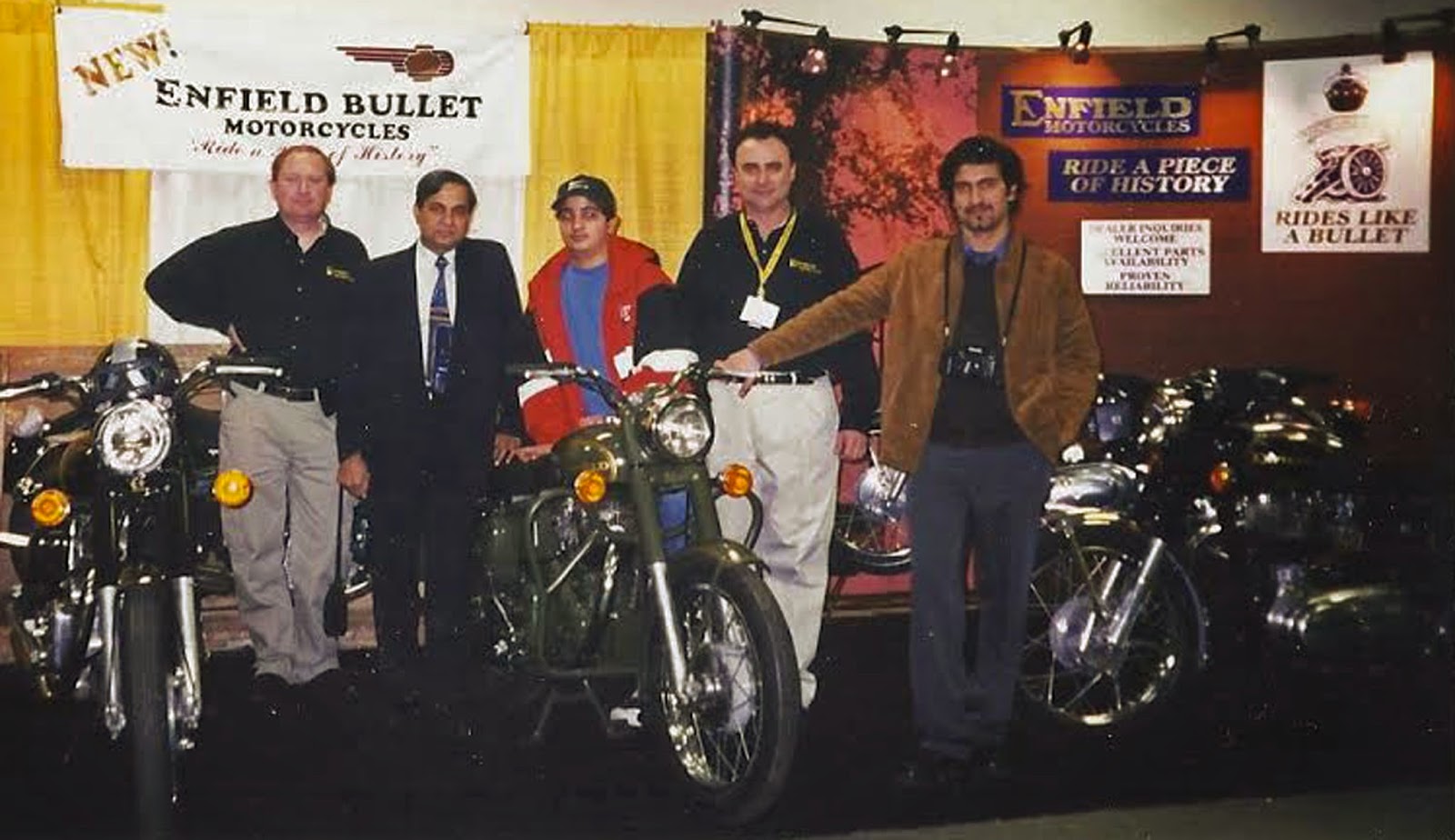 A historic picture at the 1999 Dealer Expo in Cincinnatti. Kevin Mahoney is photographed together with, at the time, young college student Siddhartha Lal. Read all about it in David's blog.