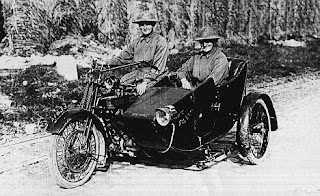 Mairi Gooden-Chisholm and Elsie Knocker were motorcyclists who in 1914 decided "there was work to be done". They initially signed up as dispatch riders for the Women's Emergency Corps in London. Their presence caused a minor scandal, clad in their masculine breeches and leather boots and jackets. Their intrepid nature got attention and they were asked to join the Flying Ambulance Corps in the Belgian front. Due to regulations, they operated out of a hospital 25 miles from the front. With the bad roads of that age that meant hours to get a patient to the hospital, most arrived dead. So they decided to take the initiative and set up a medical post right in the front line in Pervyse, near Ypres. There they would tend basic first aid immediately and then send the patient to a hospital for more elaborate care. They had discovered what modern paramedics call "the golden first hour" after an accident.

Their post was a few hundred yards from the front, in a cellar over which shells from both sides flew. Eventually the shelling got too intense and they evacuated to a house a few hundred yards further back. Their cellar took a direct hit a couple of hours after they left. They even arranged truces with the Germans to rescue pilots downed in no man's land. They would send their little dog with a note to the Germans, who instructed them to wear woolen hats instead of helmets so they would not be confused with soldiers. Their daring got attention and they became celebrities, known as the "Angels of Pervyse", being visited by journalists, VIPs and Royals. The effort was entirely privately funded (although they formally were attached to the Belgian army they claimed the enormous bureaucracy from the Belgians made it more desirable to operate with private funds). They would return to Britain to fundaise (and rest a bit from the horrors of the front).

Eventually the war ended for them when they were gassed in 1918. Elsie took a long time to recover and Mairi returned to the front, only to be gassed again. After both recovered they joined the recently created (and fledgling) Women's Royal Air Force (WRAF). They were demobilized in 1919.

The temperamental Elsie had married a Belgian Baron, apparently without telling him she was divorced and had a son from a previous marriage. When the baron learned, the marriage disintegrated. His attempts to annul it failed, however, so she remained a Baroness for life. She never integrated well into civilian life, reenlisted in World War II at nearly 60 years of age but eventually had to leave to care for her ailing stepfather. She could never get over the excitement and sense of accomplishment of those years in World War I. Mairi never married but seemed to live happily in her native Scotland.

Their story is told in a book by Diane Atkinson. See also the Mail articles here and here.

Mairi learned to ride on her brother's Royal Enfield. The picture above of them on a Royal Enfield 6hp sidecar rig is from a movie supervised by legendary director D. W. Griffith about them that was used for fundraising purposes during the war.

The book claims that when Elsie bought her first motorcycle, there were less than 50 female riders in the UK.

PS: remarkably, the Vintage Norton Motorcycles blog has a post on this same subject today!