Where in Small Heath? 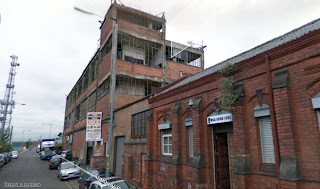 No, there was no Royal Enfield factory in Small Heath, now a suburb of Birmingham. It was the headquarters of Birmingham Small Arms, known as BSA. As its name indicates, the company had a start as an amalgamation of small arms manufacturers in 1861, a decade after George Townsend had set up in Reddith his needle mill that would eventually turn into Royal Enfield. Throughout the course of its history BSA manufactured, in addition to guns, bicycles, motorcycles, buses, steel, iron castings, small tools, coal cleaning and handling plants and hard chrome process. At its peak it was the largest motorcycle producer in the world. With the decay of the motorcycling industry in the UK, BSA was amalgamated into Norton-Villiers-Triumph. Eventually that conglomerate also failed. The bicycle division was sold to Raleigh. The motorcycle division sort of continued dormant for a while and tried to revive producing military motorcycles with Rotax and Yamaha engines. In 1991 it merged with Andover Norton International Ltd to form a BSA Group, producing parts for existing motorcycles, which eventually transformed itself into BSA Regal Group that produces spares and limited-edition retro-style motorcycles. A company still makes guns with the BSA name and actually has buildings in Small Heath (see photo). BSA also had factories in other cities, including Redditch and the BSA and Royal Enfield factory soccer teams were the protagonists of a strong rivalry in the Redditch league. Another connection with Royal Enfield came when one of the first directors of the company, Albert Eadie, left Royal Enfield in 1907 and became a director of BSA.

The reason I thought I would write in this blog about BSA is that there is a campaign to save what remains of the Small Heath factory. Enfield fans are lucky that some portions of the previously vast factory  in Redditch are still there to admire. Many other British manufacturers were not so lucky. In particular the original Triumph factory is gone. Here is a list of surviving motorcycle buildings in Birmingham.
Posted by Jorge Pullin at 7:00 AM