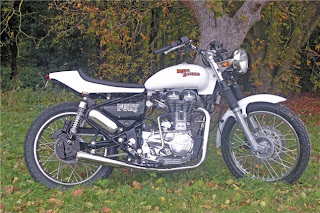 Watsonian Squire in the UK unveiled this last weekend  a new model at the Carole Nash Motorcycle Live at the National Exhibition Center in Birmingham, named the Fury. The presentation of the flat-track styled bike based on the 500cc Electra has received some coverage in the press. It is worth remembering that the model name Fury has a long tradition in Royal Enfield. First came the Fury of 1959, an export model for the US based on a 500cc Bullet with a big head engine. It was Royal Enfield's answer to the BSA Gold Star and the Velocette Venom. It had an enlarged inlet port, raised compression, lighter flywheels and aluminum alloy barrel with cast liner. Power output topped 40bhp, which could have powered it to the "ton" (100mph). But Enfield was starting to run into trouble. Apparently only 191 Furies were made between 1959 and 1963. A few of them had 600cc engines. One of them sold in auction recently for over 6000 pounds.

Then came the Fury made in India. This was a two stroke machine based on the Zündapp KS 175. It was the first motorcycle with alloy wheels and disc brakes in India. It had electronic ignition and a five speed gearbox. It was built from complete knockdown kits imported from Germany after Zündapp closed its factory in 1984 and were assembled in a separate Enfield factory near Ranipet which concentrated on the manufacture of lightweight bikes. This was in response to the Escorts group assembling the Yamaha RD350 under the brand Rajdoot. The little Fury was a peppy bike, some Swedish tuners were able to get 35bhp out of the engine. A KS 175 piloted by Martin Hildebrandt won its category in the 1997 Iron Butt Rally, ahead of Honda Goldwings, BMW R1100's and other much larger bikes. 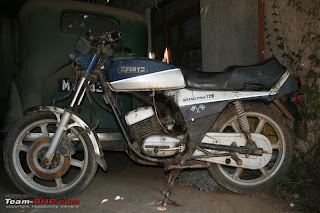