If some thought that the number of models offered in 1928 appeared too large, 1929 becomes just ridiculous: the Royal Enfield catalogue for 1929 included fourteen different types of machines. Never in the history of the company would so many models be offered. Among the new offerings, a two-port 488cc OHV sports machine, the model 505. A similar model with a 350cc displacement was also introduced. All four 225cc machines from 1928 remained unchanged, except for a reduction in price. The 346cc sidevalve saw some changes, including a saddle tank. The V-Twin acquired a Sturmey-Archer 3 speed box.

In the competition front, things started well for Royal Enfield, on February 6 in a frozen lake in Sweden, Edward Magner, the local Royal Enfield dealer broke the world speed record on a sidecar rig. 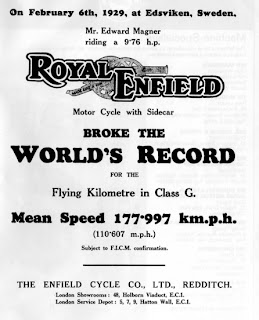 In April six Enfields took part in the Scottish Six Days' Trial: L. A. Welch on a 225cc, Campbell Spiers, Fred Bicknell and Betty Lermitte on 346cc solos, J. O. Stewart Junior on 488cc solo and G. Patrick with a 488cc sidecar rig. The first four finished the race. Welch's little machine struggled and failed at one point, so he could not get the gold medal, settling for silver, which Betty Lermitte got also. Campbell Spiers and Fred Bicknell did very well and won a silver cup each.

J. Gordon Burney placed second in one of the first Irish speed trials at the Dublin Club with a speed of 81.81 mph and two weeks later won the "Athy 75" road race at 61.00 mph, a course record. Later he won the Enniskillen Motorcycle Club open handicap road race. Cecil Barrow privateered in the Isle of Man TT. Without factory support, he managed to qualify and to place second in practices, but in the race proper he broke down and finished walking.

The International Six Days Trials took place in Germany, Austria, Switzerland, Italy and France. L.A. Welch on his 488cc OHV was one of the three members of the Great Britain No 1 team. They won the trophy. Other Enfield riders included Fred Bicknell, who broke down, was towed by Betty Lermitte and eventually abandoned the race without a passport and was trapped in Italy for a while. Lermitte finished and won a silver medal.

Royal Enfield's foreign prestige was increased when Joaquin Carrasco won a silver cup by finishing the grueling Barcelona to San Sebastian race ran on the French Pyrinees, a tortuous 559 miles through Gerona, Port Bou and Perpignan. 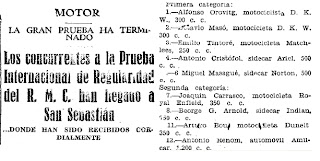 In Dublin on September 21st, T. Jenkinson on a 250cc won the ten mile championship and so did Gordon Burney in the 350cc class with E. J. Brady second also on Royal Enfield. Meantime Betty Lermitte won the Stanley Bernard Challenge Cup in the Woolwich, Plumstead and DMCC Harvest Moon Trial.
Billy Pringle established a new Australian two-way flying start 350cc solo record for the quarter mile at 90.99mph on a 346cc Royal Enfield.
On October 24th 1929 the Dow Jones Industrial Average in New York plunged 13% on top of a similar plunge the day before. Within two years it would lose 90% of its value. The world would change and so would the motorcycling industry. Royal Enfield was one of the lucky firms that survived the Depression. But the glories in racing and the variety of machines exhibited in the 1920's would never be matched again.

Source: "The Story of Royal Enfield Motorcycles" by Peter Hartley.