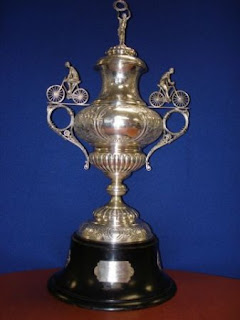 This splendid trophy was presented by the Enfield Cycle Co. to the New Zealand League of Wheelmen (the governing body of cash cycling) in 1897 for annual competition at the leagues championship meeting for the five mile scratch race.

It was first presented in the first race held in Dunedin in 1898 to Mr. G. Sutherland, a cyclist from Christchurch. The trophy was awarded every year until 1908, having been won that year by B. Campion, also from Christchurch. It is unclear why the trophy was not awarded anymore. It probably was related to a scandal that occurred in 1905 when the winner was disqualified for life for alleging collusion among the race officials and refusing to give details. Newspaper accounts stop mentioning the cup in 1910 but report of turmoil among the cycling associations in New Zealand in part as ripples from the 1905 scandal. In any event the cup remained with Mr. Campion from 1908 on. Then it passed to his daughter upon his death and upon hers, at the age of 92 it was sold with other household items. 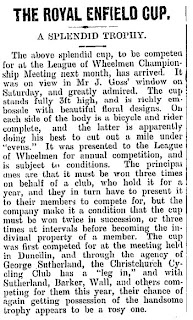 Fast forward to 2006. A person from Southlands, New Zealand, living in Australia spotted the trophy in an antiquities store. He contacted the Southlands cycling club, and the club began inquiries into recovering the trophy. A "Royal Enfield Collector" from London was also interested. Finally, due to agreements among antique dealers that in the case of historically valuable pieces give priority to buyers from the country of origin, the trophy is now back in New Zealand, and starting in 2008 it is awarded annually again. It is now the most prestigious cycling award in New Zealand awarded to the cyclist of the year. Here is the description of the trophy according to the Wanganui Chronicle, 30th January 1899.
Posted by Jorge Pullin at 7:00 AM