The first in Cape Town 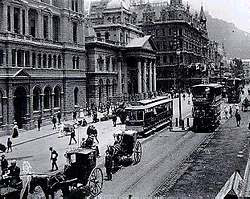 The first motor vehicle appeared on the streets of Cape Town in 1898. It was a Royal Enfield Quad imported by W.M. Jenkins manager of Garlick's Cycle Supply (a department of John Garlick's well known store), and sold to Mr (later Sir) Alfred Hennessy. As he started off from in front of the Garlicks store in lower St George's Street, he lost control and charged the crowd. An Irish policeman is reputed to have admonished him: 'When next you intend to go motoring I suggest you leave that machine behind.'
This is what the place where the incident took place looks today (it is now a pedestrian mall), 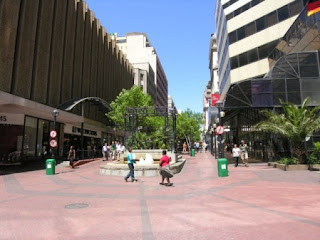 Via this page.
Posted by Jorge Pullin at 7:00 AM