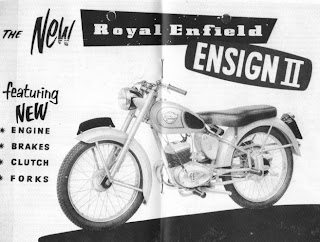 An article in The Gun #46  by Don McKeand studies the Redditch factory records for production of Royal Enfield Ensigns for export. The first Ensigns started to be shipped in January 1953 and production continued till 1959. Approximately 18,250 Ensigns were produced in four different models: I, II and III and the Indian Lance for the US market in 1957/58, although only 274 of those were produced. Ensigns were exported to 60 countries. The vast majority to India (11,221, 61% of the entire production!). Australia, Ireland, Norway received more than 200 machines each, Iran, Canada and South Africa about 140, with lesser numbers for other countries.
New Zealand, Mexico, Kuwait and Kenya got between 20-40 machines each. And then a laundry list of places got less than 20 machines, including Aden (now Yemen), Afghanistan, Angola, Antigua, Borneo, Cuba, Fiji, Vietnam and many other places. Not bad for a 125cc two stroke!
Posted by Jorge Pullin at 7:00 AM