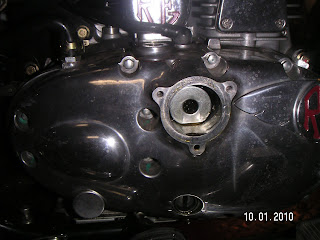 My C5 reached the 500 mile mark last year, so I proceeded to change the oil and filter. On the left is a picture of the oil filter enclosure with its cover removed showing the oil filter. Notice how I have improved on perfection by painting the RE letters on the engine in vibrant red color.  Getting the oil level right was kind of tricky. I filled it to mid level according to the glass peep-hole, but then started the engine and the oil seemed to disappear! In desperation, I topped it off again, frightful that I would destroy something, only to notice that after things settled, I had overfilled it. I had to drain a little and it now looks right. Fortunately the overfill was not large enough to push oil into the air box, as has been reported in some bulletin boards The whole procedure has its tricky aspects. The filter is pressed by a cover (removed in the photo) with o-rings, that one has to sort of keep in place while assembling the whole things. Take a look at the oil filter below, all those metal filings. That engine seems to have been chewing on itself! 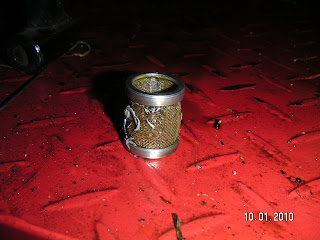