Where in Edinburgh? Part V

Visiting Edinburgh this summer, I couldn't resist going to the place where the Royal Enfield factory that made the cradles for the Flying Fleas was. It is on a curvy street named Nottingham Place that changes its name to Greenside Row approximately where the factory was. That wall on the right appears to have been mostly built to contain the land, but if you look at the very end, there is a more robust wall. That is what is left of the factory. 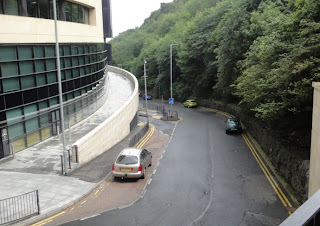 This is the wall I am referring to, 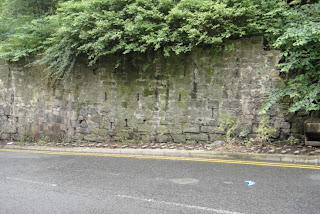 If you look carefully at the left (click to enlarge), you see a bricked-up arch. The only picture of the time of the factory has several arches, so it might be that this was the first one followed by others to the left that don't exist anymore. The arch still has the hinges of what must have been a door. 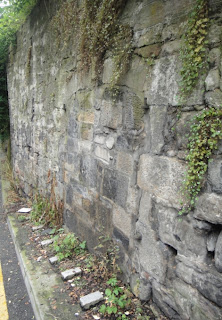 The place is adjacent to Calton Hill and there is a pedestrian street in the back, I assume that the factory extended up to there. Here is a picture taken from there. Could that have been the back entrance to the factory grounds? The land is incredibly steep, I wonder why they would have chosen to build there and then demolish, or perhaps it was landfilled after demolition. Today it is a jungle. I spent a lot of time looking and didn't see anything (I don't know what I was expecting to see... a half buried Flea?). Many tourists gave me funny looks. Why is this guy staring into a wall? they must have thought. 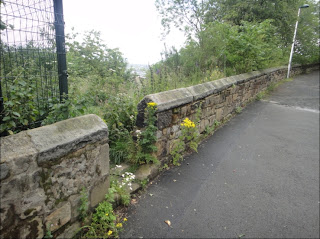