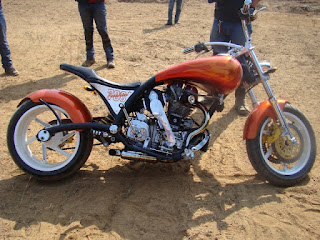 From the community forums. You can also read more at The Royal Enfield Magazine.


Greeting from Mumbai. Am enclosing a few pictures of the RR700 Prostreet, the worlds first supercharged Royal Enfield custom bike, which I thought may be of interest to you. This bike has been a labour of love and hard work by master bike tuner, Ranjit Randhawa, who working with simple tools available at his farm workshop in Kharar, Punjab, fashioned this work of art. Unlike most Royal Enfield customs, this one has been built to perform, and like how. My name is Vivek Soni and I am the proud owner of this one - off masterpiece that was commissioned over 3 years ago and is now finally nearing completion.

The heart of the bike is the old, RE iron bore engine used in the 535 Lightning - 1998 model, which has been extensively modded. The iron barrel has been replaced by an aluminium one. The head has been borrowed from the new EFI Classic 500, gear box has been swapped for a 5 speed RE unit and all of this been mated to a Aissin AMR500 supercharger driven by a crank extensively re-engineered to drive the supercharger and also handle the increased stress levels imposed on this simple and antiquated engine. Fuel delivery is via a Mikuni TM36-68 carb with push pull twin throttles and an accelerator pump for that rocket like pick up. The engine is now oil cooled and Ranjit has changed the entire lubrication system of the bike to accommodate the same. The oil flows from the cooler into a 'jacket' that envelopes the bottom part of the barrel to cool it before flowing into the sump. A separate oil line feeds the oil to the crank as the stock oil route had to give way on account of the extension of the crank pin through the timing cover on the right to power the pulley for driving the supercharger. The piston bore is 87mm and stroke is a monstrous 110mm giving this baby serious grunt of supercharged 654ccs. The long stroke motor gives it oodles of torque and pick up is 'AMAZING'. While we have yet to do a dyno run, we guesstimate power to be around 55bhp.

The supercharger is ticking over at 0.9 times engine speed and boost has been measured at around 3psi. Once the engine has been run in (so far i have done about 800kms of highway miles on it), we will play around with the pulley ratios and see how it performs at 6psi of boost, which is the level we propose to cap the boost at.

Ranjit is no engine grease monkey only. The entire form of the bike follows the function it was designed for - a classic bike based single cylinder big thumper for everyday street use in a traffic intense city like Mumbai. Its low, with a long wheelbase for comfortable mile crunching. Although the riding ergonomics are easy rider like, the rake of the front suspension is not aggressive and is sober enough to allow a sensible turning radius, which permits me to ride the bike on almost a daily basis in Mumbai.

The frame is a custom one off again designed and executed by Ranjit at a jig fashioned at his farm. The rear tyre is a 17 inch 200mm wide tyre giving the bike great traction and stability. Front and rear suspension have been donated by a crashed CBR954RR and is completely adjustable. Front brakes too come from the same crashed Honda donor bike. The rear brake is another custom one off, wherein the rear sprocket doubles up as a disc rotor (the rear brake caliper is installed on the sprocket). All body parts have been fashion from fiber glass by Ranjit, who also painted the bike at his workshop. The list of mods on this bike are endless and the end result is there to see - truly a masterpiece RE custom, that has the 'GO' with the 'SHOW'.

The bike gets more stares and appreciative inquiries than my other bike, the Ducati Diavel and that says a lot of the personality and street presence the RR700 Prostreet has. Pictures do not do justice to it, you have to see it to believe it. I ride the bike almost daily and it gives me tremendous satisfaction. The thump and viberations delivered from the long stroke single cylinder have to be experienced…puts a grin on my face everytime I fire it up.

The bike is still not complete. I still have a list of further tweaks / mods to work on the bike, which include the following:

1) A stronger Bob Newby clutch to handle the extra power

2) Triumph Speed Triple headlights (the old, round ones) which I think will enhance the looks for the bike

Thanks for looking. Hope you find it interesting.

Vivek
Posted by Jorge Pullin at 7:00 AM