We all know that the current Continental was inspired by the bike of the same name of the 1960's. But the parallels have some limits. That was a 250cc, the current one a 535cc, for instance. Now the last edition of The Gun brings a picture of the rare Interceptor Mk3 800cc prototype. It looks just like the Conti! Again the parallels have limits, that was a twin, it clocked 128 mph at the MIRA test track. Only three were apparently built, although there were allegedly already 400 orders piling up from the US. Photo provided by Alan Hitchcock. 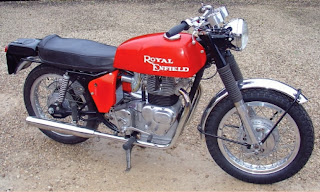