In a recent comment on the Czar's Enfields, David Blasco of royalenfields.com notices that the machines were started with a hand crank. Which begs the question: what is the history of kickstarters in Royal Enfield? Apparently the patent for the kickstarter is from 1909 by Scott Motorcycle: 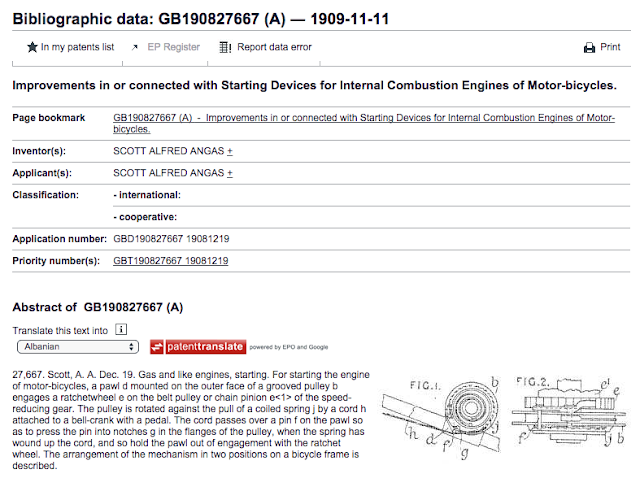 Interestingly, Enfield was producing frames for Scott in 1909.

The earliest Royal Enfields, from 1901-1905 and also the 1909-1910 model are all bicycle based, with bicycle pedals, so presumably one started them by pedaling them. The remaining 1911 models do not seem to have any starting mechanism that I can see, probably they were push-started. The new models introduced in 1912 do not have visible starting mechanisms in the drawings in the ad for them, although the latter talks about "ease of starting". In 1913 all machines in the lineup had kickstarters so perhaps they were there in 1911 and 1912. In 1914 the mighty 6hp V-Twin (for which, as readers of this blog know, nothing was impossible) has the hand crank that will be on the Czar's Enfields. It seems to have survived in the V-Twins till 1921 (see it in action here), and it seems to have disappeared in 1923. In 1924 the mightier 8HP V-Twin clearly has a "modern" gearbox with kickstarter. I guess it was all kickstaters from there on until the demise of the UK company in 1970. In India, remarkably, the ill-fated scooter Enfield Fantabulus had electric start in 1962! The Enfield Lightning offered electric start at some point of it production run, but I have not been able to determine when (late 1980s?). Bullets started getting electric start in the late 1990's. The US website lists the Deluxe model as having optional electric start in 2001.
Posted by Jorge Pullin at 10:19 AM