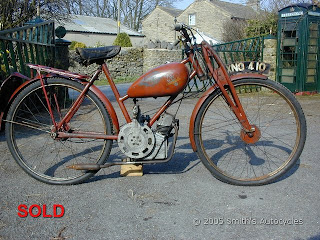 The Cucciolo was the first Ducati motorcycle. Ducati started as an electronics company founded in the 1920's. During World War II a designer named Aldo Farinelli developed the prototype of an auxiliary motor to be mounted on a bicycle. Farinelli’s design had a number of major advantages over the competition, it was a four stroke at at time when most small engines were two strokes and had a unit construction gearbox with two speeds. Ducati partnered with another Italian firm, SIATA, to produce a complete motorized vehicle with Farinelli's engine, the Cucciolo, or “Puppy”. It was the first new vehicle introduced after World War II in the world! By 1946, the rights to Cucciolo production had become exclusively Ducati’s. It was produced till 1958. In the UK, Britax manufactured a version of the Cucciolo called the Monarch with the Ducati engine and with frame and front forks manufactured by Royal Enfield.

In unmistakable Ducati form, the machines, in the fully faired "Hurricane" trim were immediately raced,

The forks that Royal Enfield manufactured for the Hurricane were essentially the same as those of the Flying Flea. Britax apparently still exists in the UK. It now makes child safety seats for automobiles!