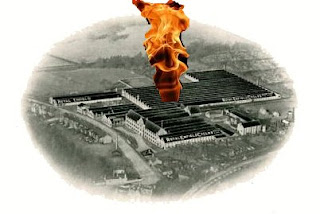 Given my interest in the history of the Royal Enfield motorcycle company, I have been surprised to notice the relative scarcity of historical material that is actually available. I claim that if you go to Royal Enfield books, in the books listed there you will find essentially all historical pictures, press clippings, etc., that currently exist. There exist other books and websites, but they all seem to draw on the same original materials.

I was actually able to see those materials, currently in the Redditch library. They consist of the collection of clippings and photographs of legendary Enfield personality Ivor Mutton, who among other things was the Royal Enfield marque specialist of the UK's Vintage Motorcycle club (you can check a letter from him authenticating a bike in The Vintagent's website). I indeed checked that a good fraction of the materials in this collection (and an even larger fraction of the really interesting stuff) has already been reproduced in the above mentioned books.

Now, I do not doubt that in addition to those materials there are others scattered out there in people's homes and in libraries that are much more difficult to access. In fact the Royal Enfield Owners club of the UK has its own library which may contain different materials than those in the Redditch library. But it still begs the question: how could a large company that operated in the UK for more than 80 years, employing thousands of people, have left such a comparatively small number of items after its demise? To give some examples, there seem to be almost no photographs of many Royal Enfield models before the 1930's, certainly no systematic set of photographs illustrating the various machines in each model year. There seems to exist only one photograph of the 1901 pioneering bike. Of the the three models introduced in 1903 only one photograph of two of them seems to have survived. Virtually no photographs of the Enfield cars, no photograph of the Enfield trike that was produced with the quad in 1898. After the 1930's such records exist, but even there in many cases only one picture of a given bike is all that is left.

This is all the more remarkable since Royal Enfield had an in-house museum in the Redditch factory, perhaps the first in-factory motorcycle museum in the world (Harley only got its museum in 2008, see David Blasco's post on it). So clearly they were conscious about protecting their heritage. What happened to all those materials?

The answer is known. It turns out that when the Redditch factory was sold, many elements in the museum were simply sold (like vintage bikes and other items) or given away to employees and other people. As for photographs, plans and other documents, they were stored in some of the rear buildings of the Redditch factory that were still in operation (the motorcycle factory itself closed in March 1967, but the maintenance department and other operations continued for over two years at the site). Next to those buildings were other buildings of the old factory that were at that time rented to a tailoring company that used them to store foam. One night, the foam ignited and those buildings burned down. Unfortunately, the fire propagated to the neighboring building where all the photographs and plans were stored and they were destroyed, according to testimony of Eddie Wright quoted in Anne Bradford's book.