The motorcycle lineup for 1905 consisted of two models with Enfield single cylinder engines, one belt driven the other chain-driven. The latter had a patented two-speed gear and clutch that will remain a Royal Enfield staple for many years in various improved forms. The bikes were extremely light, weighing less than 100lbs.

The motorcycle market was suffering of a "recession" of sorts. Many companies had jumped on the motorcycle bandwagon after 1901 and there was an oversupply of machines for the demand of the market. Royal Enfield takes the momentous decision of abandoning the production of motorcycles for the next year and to concentrate on automobiles. With the demise of the motorcycle side of the building, Jules Gobiet had left Enfield toward the end of 1904. A brilliant designer, he was responsible for many of the innovations of the early Royal Enfield motorcycles (perhaps too advanced for their time). 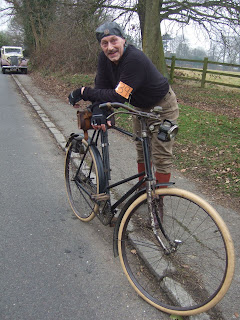 The bicycle sales were, on the other hand, doing superbly. At the Stanley Show of 1905 Royal Enfield displayed 40 different models of bicycles. This required more factory space and the company decided to purchase some land from Lord Winsor in Redditch. The new factory on Hewell Road, which would eventually grow to 25 acres and portions of which still exists today, had the entire front devoted to an office building. The factory proper was behind with separate wings devoted to different production tasks sequentially. It was considered a very advanced factory for the day with the latest in heating and ventilation and a railway line running right up to the dispatch department. The total floor space was 150,000 square feet initially. The picture on the left shows a 1905 bicycle still on the road today. Look at what the Daily Mail special Stanley Show Supplement of November 18th 1905 had to say about the bicycle market in 1905,

The automobile side of the company continued to be developed. The 10 and 20hp cars and vans were exhibited in the Olympia show in February 1905. The company also employed a French engineer from the Fabrique Nationale in Belgium called Walter Guillon. He designed two new chassis that were on show in the Olympia show in November 1905. One was called Model X and had a 20hp engine and a double phaeton body. The other was model Y with 30hp and a chassis supplied by an ouside company. The cars were very attractive, long and low with upholstered seats. Enfield was consolidating itself as an automobile manufacturer and further steps in this direction were to be taken in 1906.

(Sources: "The Story of Royal Enfield Motorcycles" by Peter Hartley and "Royal Enfield, the story of the company" by Anne Bradford.)