This post is part of the Royal Enfield Virtual museum. If you don't know what that is, visit the museum, you will be able to return here easily. ============================
Given the expansion of the automobile and bicycle branches of the Enfield Cycle Co, it was decided to float a new company devoted only to automobile manufacture. The Enfield Autocar company was set up March 1st 1906. This was a momentous decision, but the spirits at Enfield seem to have been running high at the time. Just look at this magnificent ad for the November 1905 Stanley Show (by comparison Triumph had a puny eighth of a page ad on page 9), 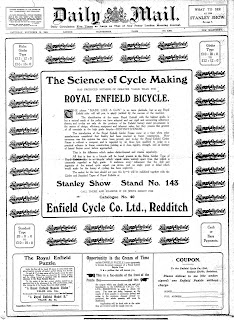 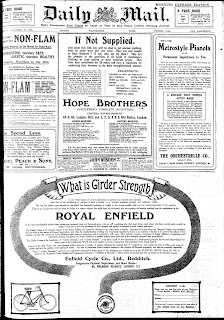 Bicycles were obviously selling like hotcakes and shareholders were obviously flush with cash to try new things.
An American, Mr. Jenkins was to head the new company. It had a capital of 150,000 pounds and Albert Eadie as director and chairman and George Cartland, Thomas Evans, E. Lancaster, Lord Ernest Seymour and Bob Walker Smith as members of the Board of Directors. The Enfield Autocar company took over the Hunt End works and additional space for bicycle production was acquired at the British Mills. The next picture shows the British Mills buildings viewed from Albert Street, where it is believed the Enfield Cycle Company had space, as they look today, 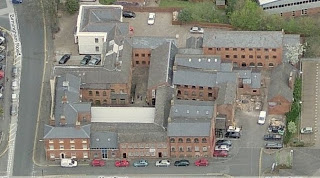 The Swiss engineer W. Guillon was brought on board the year before from the Belgian FN company as designer. Two models were soon in production, both with four cyclinder sidevalve engines. One had a 4.1 liter 15hp engine and the other a 5.9 liter 24hp engine and sold for 470 and 525 pounds respectively.
In October the company had its first own booth at the Olympia show (rather than exhibit through an agent). Lancaster and Guillon came with a new 15hp car that would sell for 375 pounds and also a 30hp car. They were well received in the show and highly praised in "Autocar" after one of their journalists drove the car. Apparently 150 cars were ordered immediately after the show and the London agent of the company, Keele & Co. doubled their original order.
In spite of this, the company almost immediately ran into trouble. They could not fill the orders in time, having had trouble recruiting the skilled workers needed to serve such demand. Then there were problems in finding accommodations for them in Redditch (at that time a small town).

The 15hp car was supposed to be in direct competition with France's Renault. At that time the French market was more developed than the UK one and exports to France were expected to be a key to success. Unfortunately a fiasco of gigantic proportions occurred at the Paris auto show: French police showed up and impounded the Enfield cars, alleging violations of French patents! It is rumored that Louis Renault had something to do with this (he was made Chevalier de la Légion d’Honneur that very year). The gear change lever and other parts were forcibly removed from the cars by the police. After a lot of arguments and payment of a 50 Franc fine, the cars were recovered in time for the Dublin auto show, but the French market was effectively closed to the Enfield cars. Also, they were returned (and displayed in Dublin) without the parts impounded by the police, which dealt a significant blow to the fledgling company's credibility.
(Sources: "Royal Enfield, the story of the company" by Anne Bradford and "The History of Royal Enfield Motorcycles" by Peter Hartley. Clouseau is actually stepping into a true picture of the 1906 Paris Auto show, but taken at the Skoda stand)