The general slowdown due to the end of the war led Enfield to concentrate on bicycles and on providing sidecar rigs to disabled veterans. The company resumed development work, including exotic machines. A four inline cylinder two-stroke, probably a development of the 1915 mysterious triple machine, was prototyped but never saw the light, since the cost of production was very high, and is now in the Baulieu National museum, 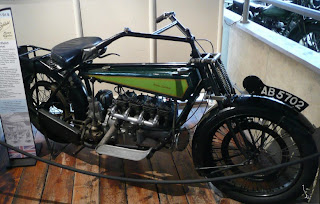 The machine had several distinctive features. The lubrication system had no pump, the splash in the massive sump was enough and it kept the machine quite cool. It had a friction clutch for first gear, so one simply actuated the lever and accelerated. For the higher gears it had dog clutches. On the road the machine silently accelerated past 50mph. It also had the first Terry spring saddle ever made. 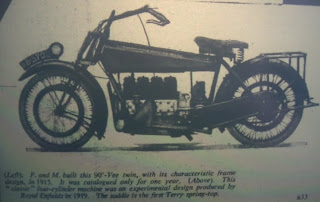 Towards the end of the year, the factory decided that the 250cc two-stroke they had developed in 1915 could see the light, 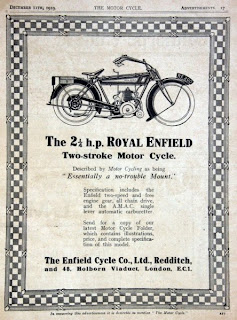 Source: "The Story of Royal Enfield motorcycles" by Peter Hartley.