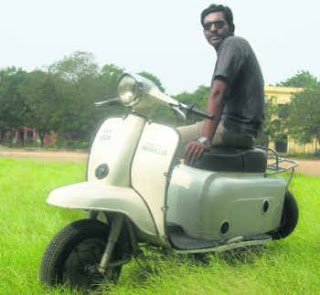 According to accounts, George Neal in Royal Enfield designed a scooter with the same styling as the Vespa or Lambretta in the early 1940's, but the factory did not pursue the project. It would have been a major coup for Royal Enfield given the scooter craze of the 50's. Fast forward 20 years. Enfield India introduced a scooter in 1962 with the original name of "Fantabulus". It had a Villiers two stroke 7.4hp engine and allegedly could reach 60mph. It was a commercial flop, however.
Fantabulus was apparently the correct spelling of the name, although it was claimed that it was short for fantastic performance, fabulous price. Interestingly, the Fantabulus was apparently featured in Royal Enfield's stand in the 1968 Earls Court Motorcycle show in London. Quite improbably, it was one of the only two Enfield machines on display, the other being the legendary 736cc Interceptor, which was starting to be released to the UK market (before that, it was only for export). At that point the body of the fantabulus was made in Madras by Enfield India and a UK manufactured Villiers Mark 11E single cylinder two-stroke engine was fitted in the UK. It had electric start! It was to be sold for £175 compared with the £382-13s-1d for the Interceptor. It is unclear if the scooter ever sold in the UK, it appears to have been more of a promise than a reality in that market.
It is interesting to see that in its last throes as a UK company, Royal Enfield reached out to Enfield India for help. I wonder why they didn't pursue this further at the time? It took 7 years after the closure of Royal Enfield for the "Madras Bullet 350cc" (as they called it at that time) to appear in Earls Court in 1977 and Enfields to enter the UK market again. (George Neal quoted in "Royal Enfield, the history of the company" by Anne Bradford).