The lineup still includes the 2.25hp machine and the V-twin. The latter is not fitted with the 6hp JAP engine anymore but with a Wolseley sidevalve engine built by Vickers Ltd. of Weybridge, Surrey, to an Enfield design. It had a capacity of 976cc and developed 8hp. It had a mechanical oil pump driven off one of the camshafts and also an auxiliary oil pump. It costed 160 pounds. Here you can see and hear one in operation, The single has acquired some optional road protection for the rider, 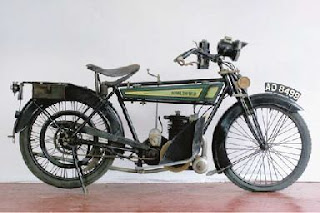 It also acquired an optional kickstarter. Floorboards were standard in both models. The two stroke machine costed 65 pounds. This was much more costly than pre-war prices, and was the consequence of inflation. The Vintagent actually owns a 1921 factory racer. Check it out!

The Gleaner announces in July that a sole distributor has been appointed for Jamaica, though apparently they didn't sell the sidecar rig, 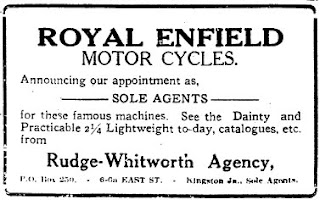 Here's another view of that 1921 V-Twin running,

Source: "The history of Royal Enfield motorcycles" by Peter Hartley