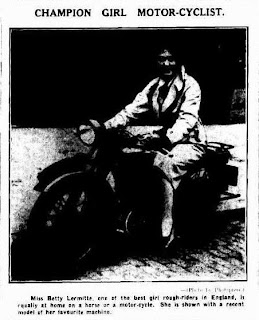 I have only been able to gather a few scraps on her. She seems to have been a remarkable person. The picture on the left is from The Argus, Melbourne, January 2, 1930. Look at the feat she pulled in this race in the Continent, she towed a disabled fellow competitor 80 miles. Talk about chivalry! 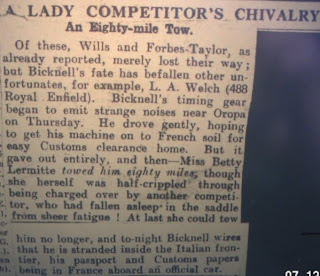 Here are some pictures of her. Check out that hat! 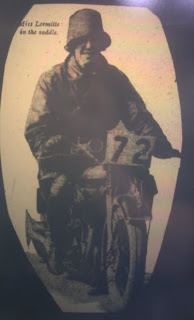 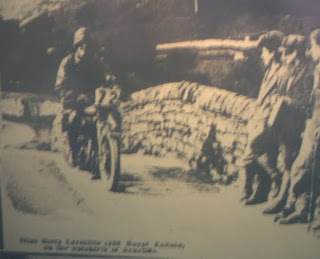 The "Four Graces" in the Scottish Six days trials in the early 1930's, 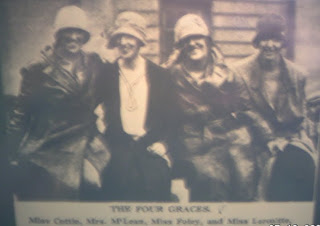 And in Sweden's "Three Days", 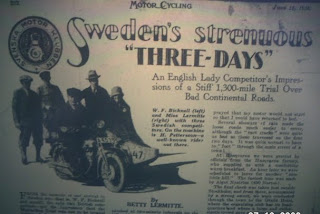 Here is what one can get chronologically from the book by Peter Hartley:

In 1927 she was part of the Enfield works trials team with Fred Bicknell and L. A. Welch. They won the Class C Team Prize, called Gloucester Trophy in the famous London to Gloucester trial. They each also got a silver cup. She also made the best performance for a lady in the Woolwich and District MC's Matchless Cup Trial, and did so well she was presented with a silver cup.

In 1928 she and Bicknell took part in the Majpokalen in Sweden, a strenuous reliability trial run by the Svenska Motor Klubben. The route covered 1,200 miles of very poor roads. The race started at 1am on Whit-Saturday in Gothenberg and the finish was in Stockholm a 9:45pm on Whit-Monday.

In the last week of April 1929 six Royal Enfield riders took part in the Scottish Six Days' Trial: L.A. Welch, Campbell Spiers, Fred Bicknell and Betty Lermitte in 346cc solos, J. O. Stewart Junior on a 488cc solo and G. Patrick in a 488cc sidecar rig. Except the last two all finished the course. Lermitte got a silver medal and Campbell Spiers and Bicknell a silver cup. In the International Six Days' Trial, the race that year traversed Germany, Switzerland, Italy and France. It was there where Lermitte carried out her mythical towing gig. Britain took the trophy, and the team included L.A. Welch on an Enfield. Lermitte finished the course with a silver medal. On her return, Lermitte won the Stanley Bernard Challenge Cup and Replica in the Woolwich, Plumstead and the DMCC's Harvest Moon Trial.

From there on there is no other mention of her.