It is commonly stated that Royal Enfield motorcycles allow you to "travel in time". Well, it turns out Google Earth also allows you to travel in time in its latest version. So I asked it to go to Hewell Road in Redditch in 1945 and sure enough, there is the Royal Enfield factory in its full glory! 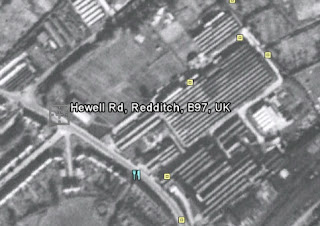 Notice the vacant land to the northwest  of the "H" in Hewell Road. There is where the cafeteria was later to be built. The cafeteria is still there today, as can be seen in this 1999 picture, 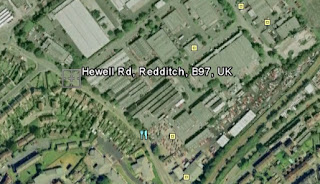 Most of the factory is gone, as we know, but the picture allows to quickly see what is left, in particular the iconic building that says "Royal Enfield" on the roof. However, a new discovery is that the building has four bodies that were part of the original factory. I hadn't been able to determine that, even by being there on the ground, since the two bodies to the right sit behind a fence today.