Broken forks, stolen bike, and much more for Enfield in the 1948 ISDT 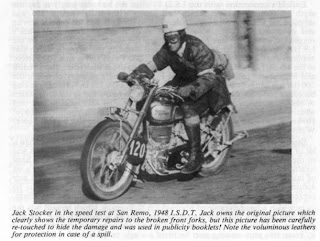 Royal Enfield did not invest a lot of effort in the 1948 International Six Days Trials. The company basically gave Jack Stoker an ex-Milk Marketing Board J2 500 and told him to make do with it. Jack prepared it significantly, removing the dual exhaust, and made several other modifications. The bike improved to such an extent that in the pre-selection competition in Wales he clocked the fastest time in the speed sections of the circuit. The ISDT would take place in Italy.

In a speech to the Earlywood Rally in 1981, Jack Stocker revealed the shocking story about how he got the Vase in the ISDT. Things started well, the Enfield held firm and performed well till mid-week. Then the lower fork crown broke on the right hand side. He thought it was the end of the race for him, but after tinkering for a while he held it together with a spare clutch cable tightened with a tire lever as a windlass. On arriving at the timing station he was unsure of how much time he had lost so he knocked over the timing clock while complaining indignantly of interference from the public to cover up his trick. Upon arrival the bike was locked in the park ferme with no one having access to it. In the morning there was a very short amount of time for minor repairs, so its use had to be maximized. Amazingly, they found on the street a Royal Enfield Model G, which had the same forks as the J2. The bike was "borrowed" (to use Stocker's terminology) with a little note left to the owner and used as a model to manufacture a U-bolt to be installed the next morning. They also used the Model G to practice fitting it in order to be able to do it as fast as possible in the morning. The bolt was installed and a chain was wrapped around instead of the clutch cable just in case.

The repair lasted well till the other side of the crown broke and then the leg of the fork on the right broke. The bike became so unmanageable that Jack sported two sets of leathers and a coat just in case of accident. The bike looked so bad that in order to prevent the organizers from noticing they decided to kick start the three bikes in the team at the same time with Jack's in the middle and let him go first so the damage would be less visible.  The bike could only steer in one direction, but the last day was in the San Remo circuit and the turns were, fortunately, in the right direction! With the fork flopping all around he managed to do 80 mph on the J2 and the team won the Vase.

At night in the hotel, Barry Smith, son of Major Smith and sales manager of the company lamented that the bike had been whisked away so quickly after the race that the journalists could not get pictures of it. Stocker pointed out that the bike looked so miserable that the only publicity it would attract was bad one. Barry Smith  refused to believe it could be so bad, so a wager was arranged.  Smith would only have to ride the bike across the hotel front court. If he succeeded Stocker would buy everyone's wine for the dinner. Smith fell after a couple of meters and had to buy the wine, which he did. Incredibly, Enfield decided to use photos of the bike for promotional purposes. They just had the front fork retouched!