The world speed record... on a Royal Enfield!

It seems hard to believe today, but once upon a time the fastest motorcycle was a Royal Enfield. Edward Magner was a Swedish army engineer. He took part in the Isle of Man TT in 1928. In the Junior event, in spite of a bad crash and having to stop for 27 minutes to repair his bike, he finished sixteenth. Back in Sweden in 1929 he appeared on the ice in Edsviken with his 996CC OHV JAP-engined Royal Enfield sidecar rig, tuned by Robban Lindholm. He set a new world record on the flying kilometer at 110.63 mph.  Then on Sunday March 9 1930,. he showed up on lake Storsjon with the same machine with a compressor. He had bad luck and the compressor blew during practice. Magner and Lindholm worked overnight to fix the bike (without compressor) and he set two world records, 117.48mph for the flying kilometer and 117.79 mph fror the flying mile. The record was in the Class G category (sidecar outfits up to 1000cc capacity). There is virtually no information about Magner out there in the internet, which is a bit of a shame. 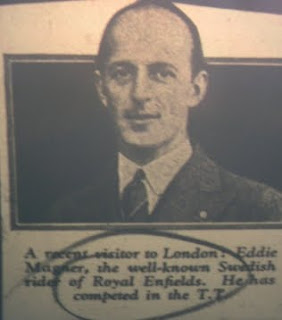 As seen in the photo, the sidecar was very small but contained 60kg of sand, 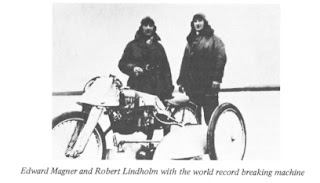