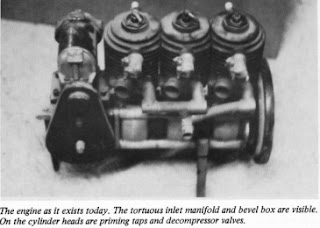 We have written before about the experimental three-cylinder 675cc two-stroke machine built by Royal Enfield in 1916 and how it appears that it was lost and reappeared when the Enfield factory and museum were dismantled  in the 1960's.  The bike sits now in the National Motorcycle Museum in Solihull.

However, in a letter to The Gun in 1981, Don McKean claims that the engine alone was sitting in a basement of the Beaulieu museum at the time. He contributed the attached picture. When was the bike reassembled? Was the rest of the bike available somewhere or did they reconstruct it from scratch?

Don ponders about the bottom end and how it was assembled. The engine was put together by laying side by side three 225cc two stroke engines and grinding out the fins so they could sit flush to each other. Holes were drilled for bolts to run across and keep them together. Putting together the bottom end must have been a tricky affair, since crankcases were split vertically and one needed to keep things sealed to keep crankcase compression. Perhaps this was a complex process that in the end doomed the machine which was never produced. He also notes the bike was incredibly long, which probably made it difficult to ride and perhaps the last cylinder didn't get proper cooling. The inlet manifold looks quite tortuous so perhaps carburation was also  tricky.

Reaction to Don's letter came a couple of issues of The Gun later. Don was claiming that the license plate that appeared on the bike when the factory was dismantled was ABP4, a 1934 West Sussex registration. This added to the mystery: why a 1934 plate for a 1916 bike? The legendary Ivor Mutton and also Bob Currie (Editor of The Classic Motorcycle) clarify that point, apparently the plate should be read as AB-P4, which is a 1916 Worcestershire trade plate. Mutton also points out the engine had the habit of running backward, and one only noticed it when one engaged in gear!

Will all the mysteries surrounding this bike ever be cleared out? Someone out there must know the answers...
Posted by Jorge Pullin at 7:00 AM