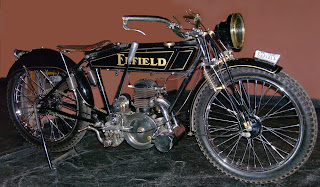 An interesting coincidence, David Blasco at  royalenfields.com had a post about a 1915 Enfield (shown in left), just as I acquired a copy in very good condition of the brochure of a Royal Enfield model 200. The brochure does not seem to list a year. The model 200 was the first 2 stroke of the company in the post-1909 era (when they started making bikes again after the 1904-1909 foray into cars). It started a tradition, as a 225cc two-stroke will be in the Royal Enfield lineup from there on until the closure of the Redditch factory in 1967. The 225cc motor was also the basis for the experimental triple  of the 1910's. It was introduced in 1914 and then reintroduced after the war in unchanged form till 1921. I place a copy of the brochure here for your viewing pleasure.