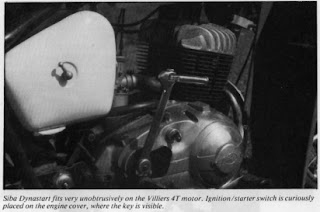 The Norton Electra was the first UK production bike to feature electric start in 1963. It also had 12v electrics to handle better the starter. In 1962 Royal Enfield experimented with fitting a Siba Dynastart unit to a Crusader. Comments in "The Motor Cycle" mentioned that the system worked beautifully. The Siba was a 24v starter with a 12v charger so the bike was fitted with four 6v batteries. This added weight. In 1965 "The Motor Cycle" staff were loaned a special Turbo Twin to cover the International Six Day Trials, a police demonstration model with Airflow fairing and electric start, both features cataloged as standard. I do not know if police ever got these units. 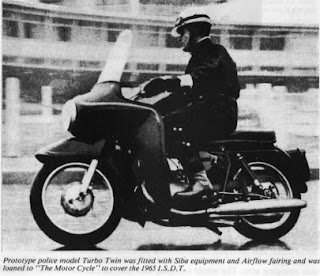 .What is for sure is that Siba dynastarts were finally fitted in the Enfield Sherpa in India and saw the light of day in an Enfield production motorcycle. The Sherpa was not a commercial success and very few are left today in India, I was only able to find the photo of a kick start model,
Posted by Jorge Pullin at 7:00 AM