The first Royal Enfields in India?

We have reported that Royal Enfield placed 1st and 3rd in the first motorcycle race ever in India in 1913. We also reported how Major Smith spoke with eerie prescience in 1932 of how "'Bullets' will be flying peaceably about the countryside, from Calcutta to Bombay and from Himalayas to Cape Comorin".

But here is an earlier sighting: March 16th 1911. It is rather remarkable that the distributor would be in Poona, one would have expected it to be at a major port. Perhaps this wasn't even the main distributor, just the one that bothered to write to the magazine? Even today that 200km stretch of road between Mumbai and Poona is quite a chore to traverse (mostly due to the crazy traffic).

And could that F. B. Stewart be the great photographer that Lord Curzon had film the Delhi Durbar in 1903? Those films are credited with launching the film industry in India. If that were the case he is indirectly responsible for launching two industries!! 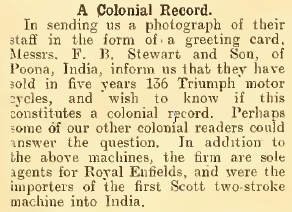