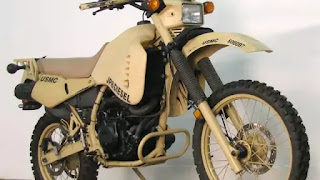 Everyone has heard about the Kawasaki KLR with a diesel engine developed for the US Marine Corps that may even be sold to civilians. Less well known is that the project's origins can be traced back to a prototype the British Army had explored in 1993, based on a Royal Enfield engine! It had a modified head with four valves. Allegedly the bike pulled away easily from petrol based 250cc bikes in trials. It had a displacement of 547cc and between 16-18bhp. More details in this site.
Posted by Jorge Pullin at 7:00 AM