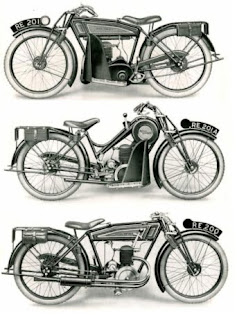 In 1928 Royal Enfield adopts saddle tanks (the tank that sits atop and around the frame like in modern motorcycles, up to then the tank was suspended below the frame) for the first time. Also gone are the "druid" type forks with side springs replaced by girder forks with a center spring. There are five separate two stroke models (200,201,201a,202,203). The 201 and 201a were "standard" machines, the 201a having a step through chassis suitable for "the lady or gentleman who prefers not to wear special clothing when motorcycling" according to the catalog. They had foot operated two speed gear. Both models had a dressguard to protect the lower legs from the elements and were available with sporting or touring handlebars and aluminum floorboards. The model 200 was a sporty model with clip-on handlebars, footpegs instead of floorboards and twin exhaust pipes for good looks. 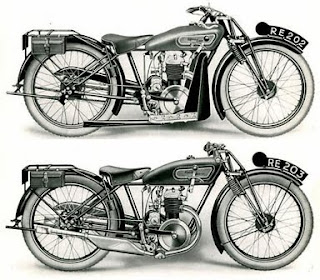 The 202 and 203 were three speed models with a short suicide shifter in the tank. The 202 was the "standard" and the 203 the "sport" without leg protection nor floorboards, clip on handlebars and sporty exhaust. The bikes sold for £ 35 cash or for £ 9 13s 9d down with 12 monthly instalments of £2 12s 4d including insurance. Price went up to £40 if one wanted M.L. Maglita electric ligting. They were taxed in the £ 30 category. 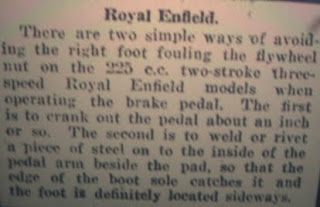 These bikes had "bacon slicer" type engines with exposed flywheels, which apparently tended to do a number on your shoes if you weren't careful, here is an advice column about the issue from a newspaper of the time. It is rather remarkable that the factory would not address these issues, since they clearly were making an effort to appeal to mainstream people wearing ordinary clothes with the leg protection, etc. 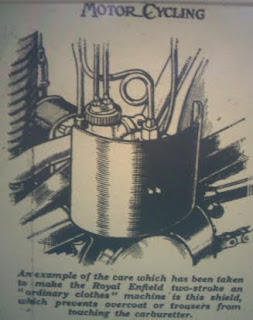 Speaking about protecting people's clothing, look at this accessory (the like of which we have not heard since) to protect clothes from touching the carburettor! It was highlighted in The Motor Cycle as one of the examples of the motorcycling industry being attentive to the customers' needs.

A new model in the lineup was a 250 sidevalve four stroke engine. It had a Sturmey-Archer gearbox and went for a reasonable £39. It was enamelled in black and had "cellulose-finished" petrol tank. It could be ordered with touring or sports handlebars. 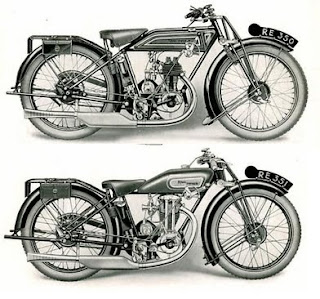 The rest of the lineup went unchanged. We have the 350 and 351 models with 346cc 3.46 hp engines, the first one a sidevalve and the second an OHV., they went for £44 and £50 respectively. Sturmey-Archer three speed gearbox with suicide shifter were standard. There was also a special version, the 352 with high level exhaust suitable for trials. The mighty V-twins came in 9.76hp 976cc engines, three or four speed (model 180 and 182) and were the preferred sidecar rig towers. As usual they were available as tradesmen's delivery outfit (model 185) and a Dairyman's outfit (model 165). 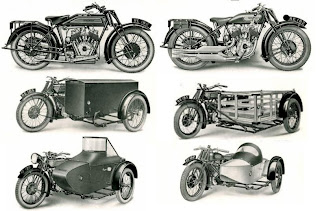 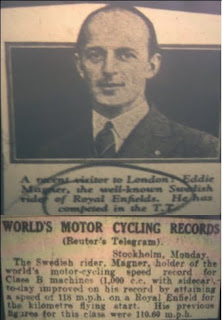 Early in the year it was learnt that Edward Magner, the Swedish Royal Enfield dealer, would compete in the Isle of Man TT. Magner would eventually break the world speed record on a Royal Enfield combo in 1930. In the meantime L. A. Welch and Fred Bicknell won gold medals in the Cotswold Cup Trial in February; Welch got a gold medal in the Victory Cup Trial in Birmingham (other four Enfield rideres got bronze medals). Freddie Clark won the Liverpool Cup Race in his 250cc solo mount. In the Redditch freak hill-climb at Morton Bank a young racer named Jack Booker won the amateur class on a Royal Enfield. He would go on to become a legendary figure in the company in latter years. 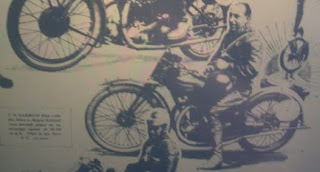 The presence of the Enfield riders at the Isle of Man TT generated great expectations. George Reynard, Gordon Burney and Cecil Barrow were the factory team and Eddie Magner ran independently. 246cc JAP engined machines entered in the Lightweight Race and 346cc JAP engined machines were for the Junior Event. The machines were considerably modified with respect to the street versions. The practice laps went very well and things appeared very positive. Alas, in the Junior race proper there were several mechanical and other difficulties. Finally Reynard finished sixth, Barrow fourteenth and Magner, who had to stop to repair engine troubles, sixteenth. His wife was in the audience, having flown from Malmo to Croydon via Amsterdam and continued by train and boat to Douglas. Burney also finished considerably behind. Incredibly, the Enfield team was the only factory team to have all its riders finish the race! In the Lightweight race things went better, Cecil Barrow placed second, Gordon Burney tenth and a privateer, C. Lord, also finished. The tiny picture below shows Burney repairing his machine near Brandish corner. 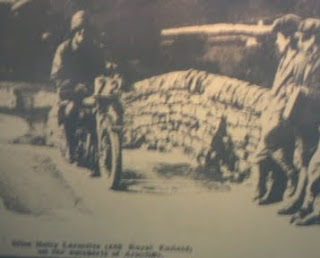 Royal Enfield was also doing well in racing events in the Continent. Framesznik won the Hungarian TT, Berrenger in France got a gold medal in the French TT, a seven day long very tough race in which he did not have a reserve rider and only 12 of the 31 starters finished. In Sweden Fred Bicknell and Betty Lermitte took part in the Majpokalen a strenuous 1,200 mile race from Gothenberg to Stockholm. In Dublin D. McKay placed third in the Leinster Hundred. 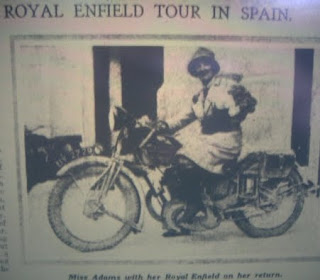 In June another lady rider brought great prestige to Royal Enfield. Gwendolyn Adams completed a 6,300 mile tour of Spain, which at the time had very primitive roads, without any trouble on her 355 solo.
The International Six Days' Trials was staged in the moors of Yorkshire. The Enfield team consisted of L. A. Welch, George Reynard and Betty Lermitte. All got gold medals, including Lermitte who finished the race in spite of having her exhaust pipe fall off from her mount. In Ireland in County Kildare at the Athy MCC Open Speed Trials, Gordon Burney ona 350cc made the fastest time over a flying start quarter mile, setting a new Irish speed record. T. Jenkinson won the 350cc and unlimited capacity handicap events. Later, in October, Betty Lermitte won the Stanley Bernard Challenge Cup riding her ISDT machine.
Posted by Jorge Pullin at 1:41 PM